From Holocaust Beginnings to Industry Pioneer, the Life of H. Joseph Gerber

There’s no doubt, in hindsight, that H. Joseph Gerber was bound for a life of greatness. What he was able to overcome in the process, however, nearly overshadows his legacy.

David Gerber has penned a biography — “The Inventor’s Dilemma: The Remarkable Life of H. Joseph Gerber” — that tells the gripping tale of his father’s journey, from surviving a Nazi labor camp in Austria to his rise as an immigrant inventor in Hartford, Conn. During his life, Gerber was awarded more than 600 patents, and his impact on the commercial printing world was keenly felt.

Among his innovations, supported by none other than the printing industry’s wandering gypsy sage, RIT Professor Emeritus Frank Romano:

“His innovations are a significant part of the printing industry’s history,” Romano wrote. “Gerber was the first in many cases and he provided an incentive for others to enter the market.”

That the elder Gerber survived to make an impact in the printing industry is a miracle unto itself. His family lived in tranquility in Vienna, Austria, before falling under Nazi rule in 1938. This reality brought out the inventor in Gerber, then a young teen — as he amplified the reception of his family’s radio to hear foreign broadcasts, and also devised a scheme to allow his uncle to send messages outside the country (and undetected by Nazi censors) using invisible ink. 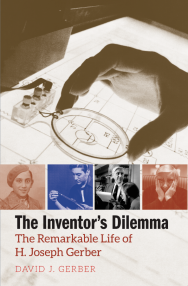 Joseph Gerber and his father later escaped into Switzerland, but were jailed and turned over to the Gestapo. When the Gerbers were put on a train bound for the Dachau concentration camp, they were able to disengage a latching mechanism on a window and jump to safety.

Eventually, Joseph Gerber was captured and sent to a labor camp in Vienna. His family was able to procure release due to his young age. With his father imprisoned in Poland, Joseph Gerber and his mother fled Austria for America in 1940.

“As he pulled heavy drums and fetched coffee for the guards, he thought about how he wanted to be productive in society, not a taker,” David Gerber wrote. “Much of this time was spent hiding and preparing for possible emigration, punctuated by crises … and opportunities that had to be seized immediately or they would be lost.

“This imparted a sense of urgency and an entrepreneurial perspective on risk-taking; namely, that delay and non-action has its own risks. I also think the Holocaust made my dad a humble man, even with his ambition and self-confidence.”

Joseph Gerber received a bachelor's degree in aeronautical engineering at Rensselaer Polytechnic Institute in Troy, N.Y. During his junior year in college, he founded Gerber Scientific with $3,000, buoyed by his invention of the Variable Scale, a numerical calculator.

Renamed Gerber Technology, the firm was acquired by Vector Capital in 2011. More than 65% of its revenues are generated outside of the United States. It spent more than $13 million on research and development last year (according to its website), a fact that would no doubt please Joseph Gerber.

“The scope of my dad’s inventions, and the other engineers that he presided over, encompassed the manufacture of most of the products we use on a daily basis: cars, clothes, shoes, electronics, eyeglasses, billboards, signs, maps and reading materials, among others,” David Gerber wrote. “Craftsmen once made those products with hand-guided tools. Today, factories and workshops use computers and robots to design and fabricate these products.”

In 1994, Joseph Gerber was awarded the National Medal of Technology by President Clinton.

Ironically, the man who contributed so greatly to technology in the second half of the 20th century and sparked innovations that involved software and computer systems, never used a personal computer.

Some Questions to Consider

Inkjet: It is Here and Now