Heidelberger Druckmaschinen AG is making it even easier to run print shops with the new and partially cloud-based functions in the Prinect production workflow. “A growing number of Prinect functions are gradually migrating to the cloud. By taking out a subscription contract, customers can gain access to them as and when required and based on the benefits they offer,” says Jürgen Grimm, head of software solutions at Heidelberg.  “The Prinect workflow thus forms the backbone of digitization in print shops.”

Automatic planning in Prinect 2020 makes it even easier to optimize job sequences. Substrates, special colors, folding layouts, and much more are taken into account in digital planning and transferred directly to the Prinect Press Center, thereby reducing the changeover procedures that have to be carried out on the press. Operators no longer have to select and adopt jobs from the machine queue, which also reduces the scope for errors.

As of now, the push-to-stop concept is also supported in postpress.

This means that appropriately configured folding machines can work through several jobs one after the other, with the status of work repeatedly reported back to the Prinect system. As a result, the productivity gains that push-to-stop has brought to the pressroom can now also be achieved in postpress.

One major contribution that Prinect makes to lowering costs and driving up productivity relates to the creation of gang forms, with the gang server picking out jobs from a pool according to pre-set filter criteria and then using these criteria to optimize the compilation of appropriate gang forms on a fully automated basis. Any gang forms produced this way that do not satisfy these criteria are not forwarded to production, and are instead canceled and then combined with other jobs later on, provided an optimum gang form can be created.

The new Prinect Plate Pilot works with the further improved Prinect Scheduler to automatically output plates so they can be placed on trolleys in the correct sequence and made available at the press in time for the planned printing slot. Operators can monitor this process via the Plate Pilot Widget of the Prinect Portal, which also allows them to intervene in the process as necessary. This solution puts an end to the tedious process of sorting printing plates and also avoids the damage and scratches that can otherwise occur.

The production of bound (hardcover) books and other complex products involves a number of steps that go above and beyond the usual processes in commercial printing.  The new version of Prinect supports the special workflow-specific features of book production in both production and MIS operations. With immediate effect, Prinect offers the option of factoring these steps into the fully automated costing of the book in Business Manager and then handing over to the Prinect production system for automatic processing.

The cloud-based software Prinect SmartBi supports the analysis and use of data generated in print shops. After all, every activity, every production process, and every job generates data, but many companies either completely overlook the value and usefulness of this information or do not fully harness its potential. SmartBI helps print shops unlock and utilize this corporate and production data quickly and with ease, assisting Prinect users with the generation, filtering, preparation, and visualization of their data.

Version 2020 of Prinect reinforces inter-company cooperation. For example, its Portal has been launched to meet the demand for a wide-ranging collaboration platform and can be used by print shop staff to establish efficient online communications both within their own company and with customers and suppliers. 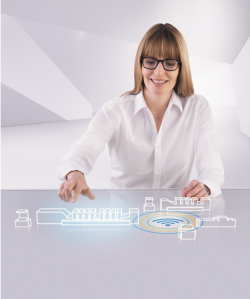 New functions for the packaging sector

To support push-to-stop in the packaging sector, Prinect is offering a new function that allows customers to use the cutting tool as a criterion for optimizing production planning. This ensures the same tool is not refitted several times over, thus significantly improving productivity and machine availability.

The cost savings and productivity gains achieved by using gang forms are also available to packaging print shops Working from an existing die cutting tool and filter criteria, gang forms are first created and then either kept or rejected depending on whether they satisfy pre-set criteria.

Having the option to set out all the parts of a packaging design in one drawing ensures the interdependencies between the individual parts can be taken into account accurately. This makes the design process easier and faster to complete.

When it comes to more complex packaging and displays, there is also the option of creating assembly instructions to make the items easier to build or set up.

What’s more, Prinect supports pillow box packaging, which can now be simulated as a 3D model and exported as an animated 3D PDF.

The launch of HTML-based online support gives users direct access from within the application to the current library of Prinect software documentation at all times, plus a growing number of explanatory videos. All this makes Prinect even easier to use.