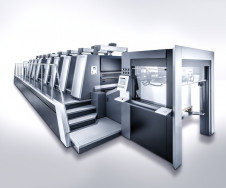 The world premiere of the new drupa-generation Speedmaster XL 106 marks the start of a new era in industrial print production with a whole new performance level.

HEIDELBERG, Germany — June 2, 2016 — The world premiere of the new drupa-generation Speedmaster XL 106 marks the start of a new era in industrial print production. For this new generation of presses, Heidelberger Druckmaschinen AG (Heidelberg) combined its expertise in automation and ergonomic operation, and is thus able to amply satisfy the requirements of commercial, packaging and label printers. Against a background of ever-declining run lengths and more frequent job changes, what is needed in order to be competitive in the market is fast, automated, reliable and efficient production. With the new Speedmaster XL 106, new features such as intelligent assistance systems and parallel, automated processes are lifting industrial print production to a whole new performance level. The greatest focus is on ease of operation and integrated, digitized processes, extending all the way to autonomous printing.

“Our drupa motto is 'Simply Smart.' We show what a fully integrated and networked print shop – the 'smart print shop' of the future – looks like, and how we achieve the perfect harmonization of equipment, services and consumables,” explains Stephan Plenz, member of the management board responsible for Equipment at Heidelberg. “The new drupa-generation Speedmaster will herald a paradigm shift in the operation of sheetfed offset presses. We are evolving from a 'Push to Start' approach to a 'Push to Stop' philosophy. Whereas today the operator must actively start processes on the machine, in future the machine will, wherever possible, do this itself. It will automatically work through the queue of print jobs. And it will do this using the ideal, shortest makeready operation, with maximum net productivity as the result. The operator then only has to intervene if the process needs correcting.”

Greatly reduced makeready times with Hycolor Multidrive
In order to achieve this high level of automation with the Speedmaster XL 106, the developers at Heidelberg have turned innovative ideas into reality. One such new feature is the "Hycolor Multidrive", which can operate the inking and dampening units independently from the main drive. For example, the inking units are washed while the main drive is responsible for changing the coating plates, or washing the rubber blankets and impression cylinders. What's more, individual inking units can be shut down if they are not needed. The inking units do not have to be disengaged for this, but always remain connected to the main drive train. On the one hand, this saves on time spent engaging and disengaging, while on the other hand the drive system remains stable against vibrations – regardless of how many and which inking units are shut down.

With the second generation of the Prinect Inpress Control 2 spectral inline color measuring system, the time until first measurement has been halved, while optimizing the control algorithms has achieved a further 20% reduction in waste. 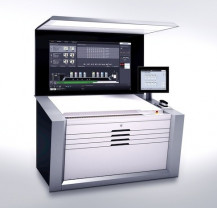 The heart of the new-generation Speedmaster to be presented at drupa 2016 is the new Prinect Press Center XL 2 control station.

A decisive step ahead with Intellistart 2
Heidelberg has invested a great deal of energy into further development to ensure simpler operation and digital integration. The foundations were already laid with the presentation of the Intellistart press operation and the Wallscreen at drupa 2008. “Based on this experience, we are now going to exhibit the next generation at drupa 2016. The new Intellistart 2 and Wallscreen XL, in combination with our new automation possibilities, are set to permanently alter the landscape of industrial offset printing,” declares Stephan Plenz. “Once again, Heidelberg will redefine the peak performance class.”

To ensure the operator has a complete overview, Intellistart 2 has been integrated into the new Wallscreen XL and is divided into four areas. Jobs released for a machine are listed in a clear, easy-to-understand 'Job Queue,' and can be moved using drag and drop. Intellistart 2 automatically works through these jobs in the defined order.

The new Speedmaster XL 106 can be ordered as a straight or a perfecting press. It produces up to 18,000 sheets an hour, and can be flexibly configured to suit individual customer requirements.

By clicking on a job in the queue, the adjacent 'Process View' section of the Wallscreen XL shows which processes Intellistart 2 suggests, in order to change from the previously planned job to this one. The “Intelliguide” timeline display shows in real time which makeready processes are currently running, how long they have yet to run, and also when the operator has to manually intervene – to change the ink, for example. However, fully autonomous production is only possible if the decision to start production is also taken automatically. This is done by the 'Quality Assist' software feature. Once all the necessary makeready processes have been completed, Intellistart 2 begins production. Here, Quality Assist recognizes when the sheet has reached the defined quality parameters, and automatically commences good sheet production.

“All customers who have seen this so far are delighted,” confirms Stephan Plenz. “In principle, it's like a navigation system in a car. Intellistart 2 automatically calculates the fastest route from A to B, and guides the operator. And we even go one step further. Like in autonomous driving, today we are already capable of printing jobs with a similar structure completely autonomously. The advantages are obvious: printing can be more easily planned and is more effective, and the operator is able to master a high job volume over a long period of time.”

Field test expectations exceeded
Feedback from field tests of the new-generation Speedmaster XL 106 is extremely positive. For example, the colordruck company in Baiersbronn, a European technology leader in the packaging sector, has been producing on a six-colo Speedmaster XL 106 press with coating unit and AutoPlate Pro plate changer from the new drupa generation since April of this year. “We have consistently focused on quality and reliability,” explains Managing Director Martin Bruttel. “To do this, we need the most modern and innovative equipment on the market. With the new Speedmaster XL 106 we are taking another major step in terms of increased efficiency.”

For colordruck, the high level of press automation, in particular, moves them one large step ahead in terms of higher throughput and therefore profitability, while also ensuring more reliable production. In packaging printing, washing the inking unit, when changing from a dark to a light ink, is very important. “With the new Hycolor Multidrive, the inking units or even the rubber blankets and impression cylinders can now get washed while the plates are being changed. This noticeably cuts makeready times, even for complex job changes,” Martin Bruttel confirms. “Our operators are delighted with the ease of operation of the Speedmaster XL 106. The new Intellistart 2 user software and the Prinect Press Center XL 2 machine control station help us tremendously to produce our jobs quickly and efficiently."

For several months now, commercial printer Aumüller in Regensburg has already been producing with a new eight-color drupa-generation Speedmaster XL 106 press with perfecting. With the Web-to-print business model, both the shortest possible makeready times and efficient production are key factors for the company, in order to ensure even faster and more reliable delivery – whether for small, medium or long runs. Frequent job changes, in particular, need to be processed intelligently. “Thanks to the high level of automation and Intellistart 2, our productivity has been further raised considerably, and we can set up a four-over-four job in under three minutes. The new AutoPlate XL 2 and the new option of washing rubber blankets at the same time as plate changing save us a huge amount of time and increase productivity,” Christian and Stefan Aumüller agree. “Our operators immediately got to grips with the intuitive operating concept – operation is now as simple and self-explanatory as a smartphone or tablet.” The operator controls and monitors workflows and gets the printing plates ready for the next printing forms. He maintains an overview thanks to the Prinect Press Center XL 2. “The press defines the work cycle by processing the jobs that are released for production on the press virtually automatically,” conclude the two managing directors. Now, over a period of nine months, 121,000 plates have already been changed and 15,000 jobs produced on the new Speedmaster XL 106-8-P.

Dynamic duo of high net productivity and cost efficiency
“We regard the digitized, industrialized print shop as a prerequisite for successful future business models in our sector,” asserts Stephan Plenz. For this reason, Heidelberg is simultaneously exhibiting two Speedmaster XL 106 presses of the new drupe-generation at its stand in Hall 1 in Düsseldorf. On the six-color Speedmaster XL 106 press with double coating, packaging and label printers can see just how simple, uncomplicated, reliable and extremely fast production and setup of jobs with high-quality finishing can be. The eight-color Speedmaster XL 106 perfecting press is aimed at commercial and Web-to-print printers, who face the challenge of frequent job changes. Furthermore, this press features innovative DryStar LED drying technology. The dry sheet enables the print-free areas otherwise required for sheet brakes in straight printing and perfecting mode to be dispensed with. And with smaller sheet sizes, 2% can be saved on the cost of paper, and the sheets are immediately ready for postpress. Both machines are integrated into the Prinect print shop workflow along the value chain, and work with Saphira consumables, which are ideally adapted to suit stringent process requirements.