Heidelberg Achieves Net Profit After Taxes for First Half of Year 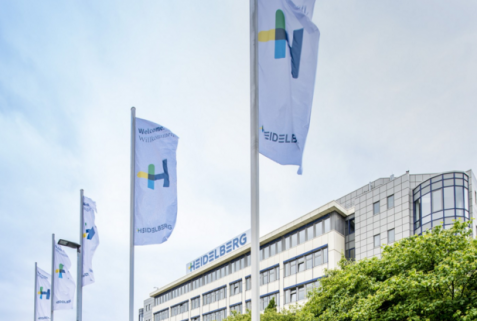 HEIDELBERG, Germany - November 9, 2017 - Heidelberger Druckmaschinen AG (Heidelberg) made further progress in operational and strategic development in the first half of 2017/18 (April 1 to Sept. 30, 2017). Thus profitability improved significantly, resulting in a half-year net profit after taxes of €+0.3 million for the first time since financial year 2007/08. In the second quarter, the company made further progress in its future-oriented strategic issues such as technology leadership, digital transformation, and operational excellence. This was achieved through, among other things, market successes with innovative digital presses, establishing new business models, and enhancing efficiency by adapting leadership structures.

“The process of converting our company into a state-of-the-art digital technology group is progressing well,” says Rainer Hundsdörfer, CEO of Heidelberg, and continues: “With the launch of new subscription models for our customers and our portfolio of innovative products for the eMobility growth sector, we’re moving into new territory that offers enormous potential for growth. Heidelberg will be setting new standards when it comes to technologies of the future, digitization, and efficiency. The necessary cultural shift has only just begun.”

Demand for digitally printed packaging and labels continue unabated. Heidelberg is extremely well placed in this sector thanks to digital label presses from Gallus. This was underlined by the numerous orders for the new Gallus Labelfire at the Labelexpo trade show in Brussels at the end of September. Heidelberg is leading the way in developing the industrial digital printing market, and aims to build on this position. The period under review also saw shipment of the first industrial digital packaging printing press, Primefire. Further customer installations will be following shortly and customer interest is continuing to grow. Series production for these digital printing systems is scheduled to start at the beginning of 2018.

The company is already fully booked in this area for two years. The IAA in September 2017 also showcased the diverse range of options for implementing customer-specific design requirements in automotive interiors by using the innovative digital printing technology from the Omnifire press series. 3D vehicle parts such as ventilation nozzles, dashboards, light alloy rims etc. can be individually designed and finished to make them stand out from the crowd.

In the second quarter, Heidelberg also began the pilot phase for launching new business models. This involves offering customers a full package of machinery, services, consumables, and software in a subscription model.

In the last few weeks, additional successful steps have been taken for new product offerings that are intended to generate around €50 million in additional sales over the next few years. Heidelberg Industry boasts substantial expertise in control and power electronics for industrial and eMobility applications. After establishing itself as a supplier over a number of years, the company is now marketing high-performance wallboxes and intelligent charging cables for electric vehicles under its own name. In conjunction with Berlin-based technology startup Big Rep, an innovative large-format 3D printing solution has also been developed that has been in series production since October.

Kickoff of a Transformation Program to Drive Operational Excellence

In the next few years, operational excellence measures are set to deliver cost savings of €50 million through increased efficiency. Good progress has been made with the improvement measures already announced relating to logistics, relocating the Development center to Wiesloch and standardizing the machine platforms. Heidelberg is also adapting its leadership structures to the challenges of digitization by the end of the financial year. The aim is to achieve a leaner, more efficient, and more agile organization with fewer hierarchies and less complexity. A corresponding transformation project was launched by the management board in October and will play a key role in achieving the efficiency targets.

Heidelberg Achieves Significantly Improved Profitability After First Half of the Year

In operational terms, the figures for the first half of financial year 2017/18 were as planned. Despite negative exchange rate effects of €18 million and the systematic reduction of trading activities with remarketed equipment, sales after six months were €1,054 million, almost the same as the previous year’s level of €1,072 million. As expected, incoming orders in the post-drupa year of €1,234 million were below the previous year’s figure (H1 2016/17: €1,408 million). The order backlog was a solid €630 million compared to the €765 million at September 30, 2016, which was boosted by drupa.

Profitability rose significantly on the previous year’s figures. EBITDA excluding restructuring result was up from €45 million to €60 million after two quarters, with the EBITDA margin reaching 8.2% in the second quarter, following 7.5% in the same period of the previous year. EBIT excluding restructuring result was €27 million (previous year: €11 million). The much lower financing costs led to the financial result improving from €-29 million to €-24 million. At €+0.3 million, the net result after taxes (after income taxes) was thus around €28 million up on the previous year’s figure (€–28 million).

The free cash flow (€-32 million, previous year: €0 million) was influenced by the acquisitions and investments made in the first six months in connection with constructing the new development center in Wiesloch. The improvements at operating level, the conversion of a convertible bond in July 2017, and a higher pension discount rate than in the same period of the previous year led to an increase in shareholders’ equity to €381 million (previous year: €126 million). The equity ratio thus rose to 17.5% (previous year: 5.9%). The net financial debt at September 30, 2017 was €259 million (previous year: €276 million) and the leverage was significantly lower than the unchanged target value of 2 at 1.3.

“Heidelberg is on a very sound financial footing, with financing secured for the long term. This will enable us to independently fund the strategic measures and the growth we are aiming for,” said Dirk Kaliebe, CFO at Heidelberg, commenting on developments. “Systematically harnessing the potential from the efficiency program will also secure our medium-term profitability targets.”

Exchange Rate Effects and Reluctance to Investon the U.S. Market – Sights Still Set on Targets for Financial Year 2017/18 as a Whole

As announced at the Annual Press Conference on June 8, 2017, the upturn in business that is typical of the second half of the year and the acquisitions that have already been completed are set to result in sales in financial year 2017/18 reaching the same level as the previous year. However, negative exchange rate effects in Asia in particular, the systematic reduction of trading activities with remarketed equipment, and the noticeable reluctance to invest on the North American market could have a dampening effect on order and sales volumes later in the financial year. After weighing up the opportunities and risks, Heidelberg still has its sights set on the targets for financial year 2017/18 as a whole. In financial year 2017/18, the company aims to achieve an EBITDA margin in the region of 7 to 7.5% through efficiency improvement measures. Compared to the previous year and factoring in a further improvement in the financial result, net profit after taxes is set to show a moderate increase.

As already announced, the strategic focus in the second half of the financial year will continue to be on initiating and implementing the strategic measures that form part of “Heidelberg goes digital” - strengthening the company’s technology leadership, rapid digital transformation, and achieving operational excellence. Although these activities will not have a noticeable impact on operations in financial year 2017/18, they will play an important role in helping achieve the company’s medium-term targets.