Two years ago, when Hederman Brothers opened its new 50,000-plus-sq.-ft. facility in Madison, Miss., complete with a new Koenig & Bauer Rapida 106 full LED-UV offset press — the first of its kind installed in the United States — it did so believing those were the necessary steps to propel the business forward. Today, that strategy is paying off and, according to owner Doug Hederman, the company has “doubled down” on its commitment to that business model.

The Rapida 106 remains a centerpiece of the operations, along with several other pieces of equipment, but the shop didn’t rest with that acquisition. Since then, it has purchased several new folders to keep up with the work coming off the offset presses, and, reveals Hederman, the company is currently looking to install a flatbed wide-format press and a router/cutter to further diversify its offerings. 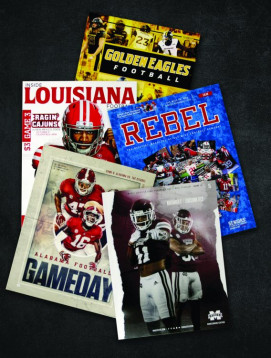 “It is really a multi-level strategy,” he notes. “We want to round-out our offerings to have one place customers can call for anything printed they may need. We’re seeing strong demand for wide-format output, and it will open up new markets for us. There are customers all around us who don’t need 5,000 brochures or 2,000 flyers, but they might need a vehicle wrap, a floor graphic or a banner.”

To that end, Hederman points out that another building expansion is in the works. He is hoping that, by the end of 2019, a new 20,000- to 25,000-sq.-ft. facility will be completed and equipment moved in. The plans are completed; at this point it’s just a matter of “pulling the trigger” to get construction started.

Hederman Brothers isn’t sitting around waiting for wide-format printing equipment or a bigger facility to expand into new markets. Its six-color, 41˝ Rapida 106 press with coater has already kick-started the company’s expansion push, allowing it to experience a “substantial amount of growth” since being installed in 2017. The press features in-line Quali-Tronic ColorControl and full LED-UV curing. It was the first press in North America equipped with two AMS XP-11 LED lamps and multiple docking points, including at end of press.

Hederman notes that capabilities such as spot UV and flood UV features on the Rapida 106 have allowed Hederman Brothers to take existing materials and enhance them in ways the company couldn’t offer before. And it has been so successful, the shop won its first PIA Benny award last year with a job it produced for the University of Alabama.

Academic and athletic work, in general, has been a major growth area in recent years. While Hederman notes the company had always done some of that work, the equipment upgrades have allowed them to take on much more.

Typically, he notes, in the fall Hederman Brothers can be producing ongoing programs for five major university football teams — each one with material that changes out from week to week.

Since the games are typically played on Saturdays, new content typically comes in either late Sunday or early Monday, which then needs to be designed, proofed, printed, folded, bound and delivered before the game the following week.

This past season, the 24/6 Hederman Brothers operation had two occasions where programs for four different universities were all due at the same time. The 20,000 sheets/hr. speed of the Koenig & Bauer press, coupled with the expertise of the printer’s staff, allowed them to not only complete the time- and resource-intensive athletic programs on deadline, but also meet job deadlines for their casino clientele and other market verticals.

“We have other customers to serve as well during the athletic season,” Hederman notes. “We can’t just stop and focus on athletic programs for a week or a season. We have other work to produce, and we have to be able to manage it all at the same time like a well-tuned orchestra. Someone has to conduct, and everyone on our team has to be in sync to make it all happen.”

Outside of programs for football, some universities have also begun asking Hederman Brothers to print programs for their other sports teams, such as basketball, baseball, and even track, soccer and gymnastics. In addition, these universities have begun to rely on the printer’s ability to create eye-catching enrollment and recruiting materials.

“Being able to do the reticulating varnishes and spot UV enable us to create pieces that capture the attention of prospective students these schools want to enroll,” Hederman notes. “Younger generations are fascinated by printed materials that possess a gloss, a soft feel or a different look. Given that they’re so accustomed to looking at a screen, they really do pay attention when you put something highly unique, like a piece with motion coating or that has some definition, in their hands.”

Doug Hederman is the fourth generation to operate Hederman Brothers, and he is hoping that one day he will be able to say it is a fifth-generation business. With a son turning 20 and a daughter turning 17, either or both siblings may end up taking over the business one day. For now, Hederman notes that his son is majoring in business at the University of Mississippi, with a secondary degree in manufacturing excellence, which will prepare him well for a future career — whether he joins the family business or not. 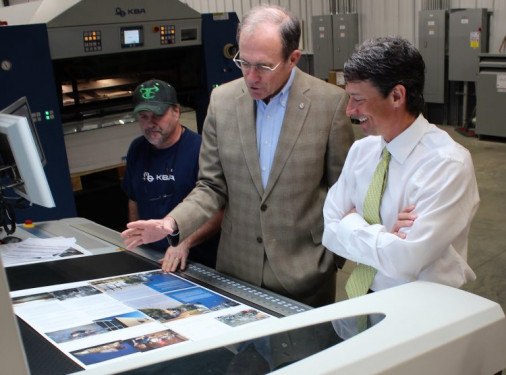 “I’m not putting any pressure on him; but all my preparation right now is to have it ready for him at some point in the future,” Hederman notes. “At that point, if he decides not to take over the business, we’ll change strategy and do something different.”

Because Hederman’s son is involved in the University of Mississippi’s manufacturing excellence program, Doug Hederman is giving serious thought to bringing student interns into his shop to learn more about the career opportunities that exist in the printing business.

“We’re in discussion about getting involved in their internship program,” he says. “I’m an alumni of the school, and an internship wasn’t offered when I was there — this is something that was developed in the past 10 years.”

The program, he points out, allows students to build and model products on a production floor, and includes instruction on how to build a cost analysis for manufactured products and then figure out how they would produce, market and sell those products. “It’s a fascinating program, and I’m like a kid in a candy store when I see what they’re doing,” Hederman adds.

A variety of large manufacturers are already participating in the program, in the hopes that students will not only want to build careers in the manufacturing field, but do so locally, rather than going out of state to find jobs. For Hederman Brothers, future involvement might include offering internships, or allowing students to come in and study the print production process.

Investing in the Future

The end result: Hederman Brothers is making a concerted effort to invest in the future of the business — from operating state-of-the art presses, to building new facilities, to adding new print technologies to its arsenal of options, and getting the next generation excited about the possibilities of print.

It is a strategy that doesn’t rely on any one single avenue of growth; but is rather a multi-pronged approach to ensuring this family-owned business continues to stay at the top of its game for many more generations to come.