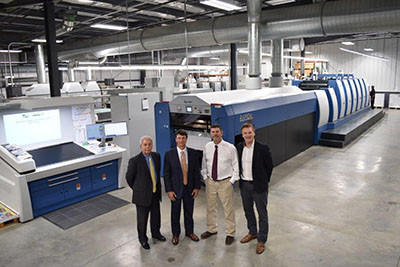 “Being a leading commercial printer in our region for more than a century, we are excited about all of our new equipment especially our centrepiece - the KBA Rapida 106 press - the first of its kind in North America,” says Doug Hederman, President and CEO of Hederman Brothers and its fourth-generation leader. “Our goal is to continually serve our customers with the highest quality, most advanced technology, and fastest throughput. We chose this specially-configured press with proven automation and technology from KBA because we believe it will surpass the high expectations and demands of our loyal customers and address the speed, quality, and designs that we produce for them. This will be our first KBA press. This beautiful new facility, our ongoing commitment to our customers, and our years of service has been a humbling experience that has allowed us to continually grow and invest in the best technology in the printing industry.”

Hederman’s new facility was strategically designed to be workflow-orientated. It provides a systematic flow with precise stationing of both people and equipment.

Hederman Brothers was established in 1898 by brothers Robert and Tom Hederman in Jackson, MS. In 1928, the firm purchased the first offset printing press to operate in Mississippi. After many years of steady growth, Robert’s sons, Zach and Henry, assumed control of the thriving company in 1938. For decades the firm continued to thrive. In 1982, Henry and his son, Hap, purchased the printing company from the other family members with plans of expanding the 40,000-sq. ft. office in downtown Jackson.

With business and technology booming in 1993, Hederman Brothers purchased its first 40" 6-color press with aqueous coating capability and moved to a new facility in Ridgeland, MS, which nearly doubled the size of the downtown printing facility. In 1998, Hederman Brothers became an ISO certified company and celebrated its 100th anniversary. Since then, the firm has added a new division called Hederman Direct as well as a full line of digital presses. The company has relocated into a new facility in Madison, MS, to accommodate its continued growth.