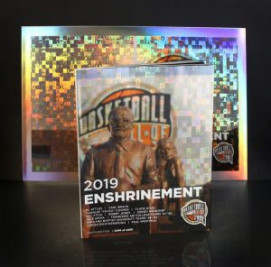 The limited-edition yearbooks were printed on an HP Indigo 5500 press, created on Holojet, a Hazen Envirofoil product engineered specifically for digital printing.

Hazen Paper Company’s enshrinement yearbook for the Naismith Memorial Basketball Hall of Fame in Springfield, Mass., brings the entire Hall of Fame roster to life on the cover in a three-dimensional holographic mosaic of portraits. Each image, a quarter-inch wide, flips from positive to negative as the book is tilted by the viewer and the paper reflects and refracts light. It serves as a mesmerizing backdrop for the sculptural bronze Naismith Coaches Circle Monument, featuring basketball founder Dr. James Naismith, that dominates the cover and commands the plaza in front of the Hall of Fame.

The seventh yearbook cover in a row produced by Hazen, the appearance of the 2019 edition is noticeably different from earlier yearbooks, and the custom holography more complex. Creating the color-motion holography at twice the resolution of standard holography enabled recognizable rendering of each of the portraits, despite their size. According to Hazen President John Hazen, “Our holographic team sees each opportunity to collaborate with the Hall of Fame as a challenge to enhance the organization’s branding – and up our game. This year, the result was Random Blinking Holoface. On a cover highlighting distinctive components of the Hall of Fame brand, the logo also gets dynamic, dimensional treatment with Hazen-Lens. 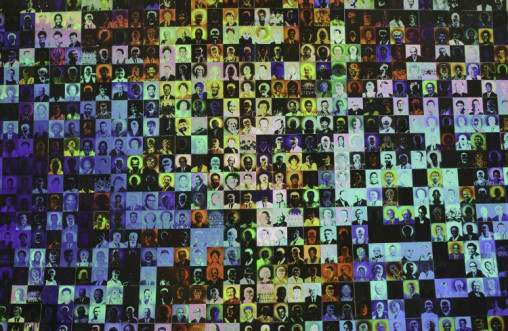 Hazen also produced a companion poster for the Hall of Fame employing holography to illuminate the iconic dome and its rainbow lighting.

Individually numbered for authenticity and security, the limited-edition yearbooks were printed on an HP Indigo 5500 press, created on Holojet, a Hazen Envirofoil product engineered specifically for digital printing. Hazen also produced a companion poster for the Hall of Fame employing holography to illuminate the iconic dome and its rainbow lighting. Envirofoil delivers outstanding visual effects, reliable performance, and significant environmental benefits. Manufactured with renewable energy, it uses less than 1% of the aluminum of traditional foil laminate, reuses the plastic, and is recyclable as paper. Available in a range of holographic patterns and metallic colors, it can be fully customized for unique brand communications and packaging, as well as collectible posters, tickets and magazines, such as the Basketball Hall of Fame yearbook and the NFL Super Bowl program.