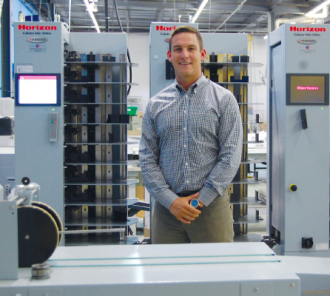 Founded in 1983, Hatteras is a second-generation family-owned business located in Tinton Falls, N.J. The company has offset, digital and large-format printing operations to serve a broad range of customers, primarily in the retail and pharmaceutical markets.

“Achieving double-digit growth requires constant operational review to eliminate inefficiencies,” says Bill Duerr, President. “One area of opportunity for us was developing a digital finishing operation that could take the burden of short-run, fast-turn work off of our traditional bindery. As our digital volumes continued to grow and the digital percentage of our business became more significant, this became a focus for us.”

“In addition to the disruption caused in our bindery by the introduction of digital work, our more commercial bindery equipment doesn’t always handle digitally printed material as delicately as we’d like,” Duerr explains.

Hatteras turned to Standard (Booth 4433) and its local dealer, Print Finishing Systems, for a solution to its digital finishing needs. “We started with a Horizon CRF-362 Creaser/Folder and a Horizon StitchLiner 5500 Saddlestitcher with three 10-bin VAC collating towers,” Duerr says. “We felt the bulk of the digital work could be finished with those two pieces of equipment. Later, we added a VIVA Inspection and Tracking System to our StitchLiner to verify that cover page data matches data on all the other pages. The system’s automation and 100 percent verification helps us with the many variable data projects we are doing.” Duerr cites a weekly program for one client that requires fulfillment of booklet orders every other day, as well as variable data booklets prepared for a higher education customer, where the StitchLiner system has really streamlined production.

Most recently, Hatteras acquired a Horizon SmartSlitter, which the company uses to produce a number of basic products, including postcards, brochures and sell sheets. “The ability to take flat sheets and finish those basic products without a lot of changeover and make-ready is critical to making those jobs profitable. We also print 2D barcodes in the cut-out area of the sheet,” Duerr explains. “The SmartSlitter reads each one and configures itself based on the information pulled from the barcode. You can just stack several jobs on the system and it knows what to do. With all the automation we now have, an operator can manage multiple pieces of equipment at the same time. It lets us use technology as a tool so we can do more and get the best out of our people rather than having them bogged down with tedious tasks.”

Duerr says he chose Horizon because he feels their equipment is well-built and durable, with a simple user interface. He has also been very pleased with the support he has received from Standard and Print Finishing Systems.

“For digital printers, the finishing piece is the most important thing in the whole puzzle,” Duerr comments. “Printing is easy; finishing is the tough part. You need a streamlined workflow that can be scaled across multiple clients.”

As a bonus, Hatteras has been able to finish some of its offset products in the digital bindery as well. “We’re very happy with our bindery capabilities,” Duerr concludes. “But there are always things you can do better, and we are staying in touch with Standard as we explore more options, including die cutting and other equipment. We like to be able to say ‘yes’ when a client needs something to be done!”