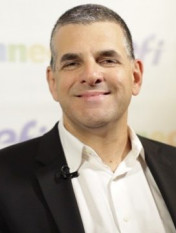 ALEXANDRIA, Va. — July 20, 2017 — Idealliance, the association for the Visual Communications and Media Industry, is pleased to announce that Guy Gecht, CEO of EFI, will be honored as the recipient of the 57th annual Walter E. Soderstrom Award. The award will be presented at the gala Soderstrom Awards Dinner at the University of Chicago Gleacher Center, Chicago, 7 p.m. to 9:30 p.m. on Saturday, Sept. 9, the evening before the opening of the PRINT 17 show.

"Guy Gecht has a distinguished record of leadership in our industry and an unparalleled dedication to its progress and technological innovation," said David Steinhardt, president and CEO of Idealliance. "He is a singularly worthy recipient of this significant honor and Idealliance is delighted to present him with its 2017 Walter E. Soderstrom Award."

Known for his insight and strong vision of the printing industry’s future, Gecht has helped redefine the ways printing companies pursue new markets and refine their production operations and has guided EFI to become one of the industry’s most successful publicly traded companies.

Gecht joined EFI in 1995 and served in a variety of management and engineering roles, including company president, before becoming CEO in January 2000. From 1996 to 1999, he led engineering efforts for its largest product line and became Vice President, General Manager of EFI's Fiery Servers Division. He led his team to dramatically expand EFI's server product line, launching more than 35 products in 1998 alone.

Gecht was named a "Legend of Silicon Valley" in 2013 by the Frost & Sullivan Institute and a 2015 Game Changer by the Silicon Valley Leadership Group. In 2015 he also received the Technical Association of the Graphic Arts (TAGA) Michael H. Bruno Award for his dedicated service and contributions to the advancement of the global graphic arts industry. Gecht holds a Bachelor of Science degree in mathematics and computer science from Ben Gurion University in Israel.

Industry companies, manufacturers, and suppliers are invited to participate in the Soderstrom Awards Dinner, an event many consider the industry’s most elegant evening. Reserving a table offers companies a perfect opportunity to bring together key executives and select customers or prospects for socializing and quality networking in a beautiful setting.

Tasteful signage on reserved tables also provides well-deserved recognition of a company’s support of the industry at one of its signature events.

Full and half-table sponsorships for the Soderstrom Awards Dinner are available for $5,000 and $2,500, respectively. Individual tickets are $195 before Aug. 15, $225 after that date. For information about table sponsorships or tickets, please contact Dean D’Ambrosi at (703) 837-1064 or ddambrosi@idealliance.org, or visit www.idealliance.org/events/soderstrom-gala/.