BLUE ASH, Ohio - February 27, 2018 - It may only be February, but 2018 is already proving to be a banner year for Graphic Village and the newest member of the GV family, Multi-Craft.

The two divisions are pleased to announce they recently received a combined total of 16 2018 Print Excellence Awards from the Printing Industries of Ohio • N.Kentucky, an association of over 300 commercial printing companies and suppliers.

“Winning even one Print Excellence Award, not to mention a combined 16, is a great honor, and we appreciate being recognized as a leader in our industry,” said Eric Kahn, CEO of Graphic Village. “Even more gratifying are the successes of our clients as a result of work we’ve done for them - that means everything to us.”

“Winning a Print Excellence Award is a mark of true craftsmanship,” added Jim Cunningham, president of the Printing Industries Association.

All regional Gold Award winners are entered into an association-wide competition for Best of Category and Best of Show prizes. These will be announced in September at the 2018 Grand Ceremony in Columbus. 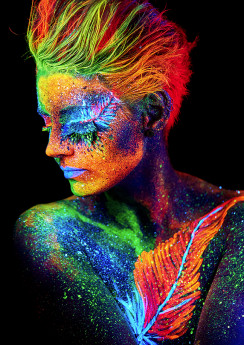 Closer to home, GV’s gold-winning posters were also honored at this year’s Printing Industry Banquet for the Southern Region. “Basketball Player on Black Cover” was named Best Poster. “The Painted Lady” was recognized by industry peers with a People’s Choice Award.

“Ken and Jeff are experienced judges and printers whose combined expertise spans more than 50 years in print,” Cunningham said. “Yet even they were impressed with our members’ incredible work. It’s easy in today’s fast-paced world to just get the job done, but our Association members continue to demonstrate the pride and dedication to their craft that have made Ohio and Northern Kentucky printers some of the best in the world.”