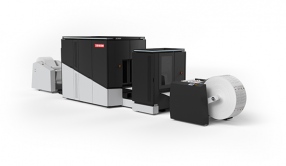 “Many of our jobs require 24-hour turnaround, and we were truly impressed by the Xeikon SX30000’s speed and the quality of its output,” said Grandville’s Manufacturing Engineer Bruce Beery. Grandville’s Xeikon SX30000 will be used for applications such as retail shelf strips & tags, newspaper inserts and other traditional commercial printing jobs. “We acquired our first Xeikon press in 2011, and the reliability of Xeikon – both the presses and the people who support them – has unquestionably proven itself over the past decade.”

Announced late last year, the Xeikon SX30000 is the company’s flagship digital press for the graphic arts. Based on Xeikon’s SIRIUS dry toner technology, the press is a single-pass duplex machine capable of running at 98 feet per minute (428 letter pages per minute), a 50% speed increase over previous Xeikon presses. The SX30000 is suited for a wide range of applications including high-quality books, direct mail, point-of-sale materials, security documents and general commercial printing – producing over 2500 B2 (4/4) sheets/hour.

“We at Xeikon are avid believers in the power of dry toner, and Grandville’s continued success is a testament to the quality and flexibility of that technology,” said Donna Covannon, Director of Marketing, Xeikon America, Inc.

Grandville Printing Company also acquired a Xeikon CX500, a state-of-the-art label press that runs at 98 feet per minute and features a web width of 20.47 inches.