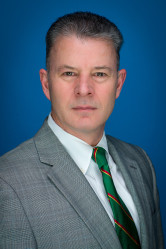 From 2003–2006, Leary served as Manager/Senior Attorney at the Department of Homeland Security. There he was detailed as deputy and then acting Senior DHS Representative to the Terrorist Threat Integration Center, the predecessor to the National Counter Terrorism Center. From 2001–2003, Leary was the Senior Advisor to the Under Secretary at the Department of Treasury.

From 1996–2001 Leary was an Assistant District Attorney in Philadelphia and Boston where he prosecuted more than thirty jury trials and two hundred bench trials.

Leary has thirty-three years of combined active and reserve service in the United States Marine Corps. He completed combat tours in Iraq and Afghanistan and received a Bronze Star as well as a Legion of Merit award. He retired from the Marine Corps as a Colonel in 2016.

Leary is a 1986 graduate of the University of Notre Dame where he received his Bachelor of Arts and a 1996 graduate of Notre Dame Law School where he received his Juris Doctorate. He is currently a member of the Adjunct Faculty at the Marine Corps Command & Staff College and a certified mediator for the State of Virginia and with the federal government.