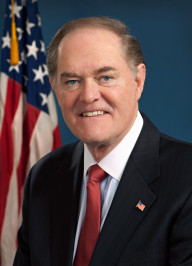 William “Bill” J. Boarman, who served as Public Printer of the U.S. Government Publishing Office (GPO) from December 2010 to January 2012, passed away Sunday, August 22 in Severna Park, MD. He was 75 years old.

“The GPO team and I send our deepest condolences to Public Printer Boarman’s family and friends,” said GPO Director Hugh Nathanial Halpern. “While I never had the opportunity to meet him personally, Bill’s accomplishments as the leader of GPO helped shape GPO into the successful enterprise it is today. He will be missed.”

Boarman served as the Nation’s 26th Public Printer after being appointed by President Barack Obama. His appointment was a homecoming of sorts, as Boarman worked at GPO during the 1970s as a printer/proofreader before leaving to serve in various elected posts within the International Typographical Union, which merged with Communications Workers of America (CWA). He became Senior Vice President and President of the Printing, Publishing, and Media Workers sector.

During his year as Public Printer, Boarman led GPO to do more with less by reducing the size and costs of the agency, streamlining operations, and utilizing new technology. Under his leadership, GPO launched a taskforce to recover outstanding payments from Federal agencies, a program that still exists today. During FY 2011 GPO recovered more than $9 million outstanding payments. And GPO launched its first mobile app and expanded the agency’s social media presence by launching a Facebook page. In December 2011, Boarman made GPO history by naming Davita Vance-Cooks as Deputy Public Printer, the second-highest ranking position at GPO. Vance-Cooks was the first woman ever to be appointed to that position and went on to become the first African American and first woman Public Printer. While Boarman was Public Printer, GPO celebrated its 150th anniversary and opened a history exhibit showcasing the important role the agency plays to our country.

Boarman was associated with the printing industry, its labor relations, and personnel management for over 50 years, starting with his four-year apprenticeship at McArdle Printing in Washington, D.C.  in 1971. He was a resident of Severna Park, MD.