For someone like me, the thought of running a single marathon is overwhelming. At 26.2 miles, it's no easy task. But BethAnn Telford, special events coordinator at the U.S. Government Publishing Office (GPO), is preparing to run seven marathons in seven consecutive days on seven continents. It's called the World Marathon Challenge and only 26 people have completed the challenge to date — five of them were women. 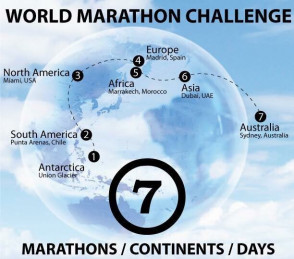 Although she is leaving for Chile on Jan. 14, 2017, to begin preparing for the challenge, the true start to the race will be Jan. 23 in Antarctica which will end on Jan. 29 in Australia. With 59 hours spent in the air traveling 38,000km, running 183 miles in total in temperatures ranging from -20 degrees to more than 100 degrees, the 15 participants in the 2017 challenge will be traveling from Antarctica to Punta Arenas, Chile; Miami, Florida; Madrid, Spain; Marrakech, Morocco; Dubai, United Arab Emirates; and finally to Sydney, Australia, during the span of seven days.

Although this would be a feat for any human, Telford isn't your average woman. She is the first, and only, person to compete in this race with live cancer. Twelve years ago, Telford was diagnosed with Glioblastoma Astrocytoma, the deadliest form of brain tumor. Although the life expectancy for this diagnosis is a mere five months, Telford has fought for 12 years and continues to fight every day. She has become an advocate for brain cancer awareness and has used her endurance training and athleticism as a platform for spreading understanding and recognition of the need for a cure.

Eighteen years ago when she moved to the Washington, D.C., area, she began running as a way to be active and completed her first marathon — the Marine Corps Marathon — a year after she began running. However, when she was diagnosed with cancer 12 years ago, she was told by doctors that she would never run to that magnitude again. After surgery and learning to walk and speak again in the hospital, her doctors took her to the pediatric wing of the hospital and she was struck when the doctor told her most of the children would never go home again.

"I knew I had to do something," Telford says. 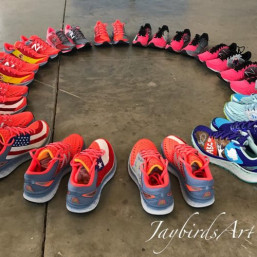 And so she did. After five months, she ran her first 5k and just a year after her diagnosis ran the Marine Corps Marathon again. With cancer advocacy as her platform, Telford began to think about how she could get kids involved in her endurance athleticism. She asked the children in the pediatric wing to decorate her shoes so they would be with her during every race. She has since competed in Iron Man competitions and the world championship, six Boston Marathons and has crossed the Grand Canyon in a nine-hour trek.

For this epic event, New Balance and the foundation that Telford fights for, Accelerate Brain Cancer Cure, have sponsored Telford's 14 pairs of sneakers needed for the event. Children submitted drawings on a template and with the help of a local artist who painted 14 of the children's drawings onto the shoes, Telford will be running for, and with, the children she is fighting for.

Although Antarctica will have its challenges — she is hypothermic, not including other concerns that her cancer brings when encountering any extreme conditions — she says the most challenging segment for her will be Australia.

Everyone thinks that will be the finish line, but it's not for me. The finish line is when the papers read that there has been a cure for cancer ... I need to find a cure. I need to advocate more.

What makes Telford most nervous about the race?

"The packing!" she laughs. "I'm the world's worst packer."

GPO Puts Forth Its Support

Telford explains that her colleagues at the GPO have been, understandably, very supportive and excited for her to make this journey.

“BethAnn is a true inspiration to us all,” said GPO Director Davita Vance-Cooks in a press release. “Her enthusiasm for life is contagious and she never fails to amaze all of us by successfully competing in one competition after another. I and GPO will be rooting for her as she embarks on this incredible race around the globe. Best of luck BethAnn!” 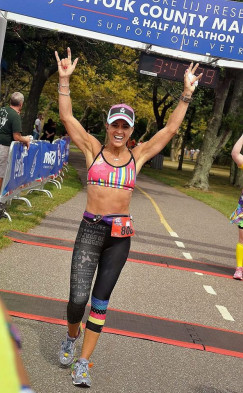 Having been with the GPO for 15 years, first as an assistant to the Public Printer and then as a special events coordinator, Telford explains that she became interested in printing because it was an outlet for disseminating information. She likes to explore the production floor and be with the operators printing and finishing the documents and books created by the GPO. She loves to organize the events for the GPO and being able to see the smiles on everyone's faces.

She also loves to spend time with her family and watch history programs on Netflix. Her main passion, though, is advocacy.

Because, as Telford puts it, "Cancer doesn't discriminate." So until the time comes when it is eradicated, Telford will continue to use her platform to raise awareness and fight for the cure, one step at a time.