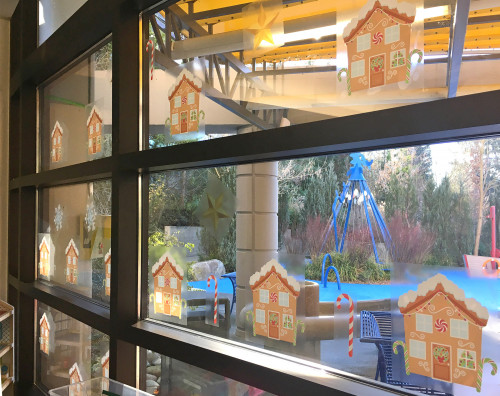 CHICAGO, Ill. — January 13, 2017 — GPA partnered with one of its customers through a donation to help make the holiday season more cheerful for children in the hospital.

Each year for the last 15 years, the team at Merchandise Agency, BDA, located in Woodinville, WA, helps decorate Seattle Children’s Hospital with festive holiday images. BDA reached out to their printing partner, Seattle-based DCG ONE, to print, trim, and deliver thousands of snowmen, snowflakes, candy canes, and gingerbread house decals. On December 7, the BDA team spent the day adorning the hospital’s windows and walls with the graphics.

“BDA has decorated the walls and windows of Seattle Children’s Hospital for the last 15 years to uplift the spirits and bring some cheer to the kids and their families who have to spend so much time in the hospital at this time of year. We are proud we could make an impact, and look forward to continuing this tradition for years to come,” says Kerrie Ingham, Director at BDA.

To make this project a reality, DCG ONE wanted a substrate that offered proven press performance, easy application and would remove cleanly. Additionally, they needed a material that would adhere despite the heavy window condensation that occurs during Seattle winters. GPA’s Ultra Digital 4 Mil Clear Flexible Vinyl with Low Peel/Removable Adhesive was a perfect match. GPA donated enough material to decorate 300 hospital rooms plus the lobby at Seattle Children’s Hospital, and DCG ONE used their HP Indigo 7800 press with 4-color process plus white ink to create the graphics. After printing, the decals were guillotine cut and ready to go.

“As soon as we heard about this project, we immediately wanted to get behind it,” says Ryan Carns, Account Executive at DCG ONE. “Since many of the kids at the hospital wouldn’t be able to leave their rooms or get out in time to celebrate at home, it’s the least we could do to help bring the holidays to them, and it was a great honor to be a part of that.”

“Without question, this was a project that GPA wanted to support. To know that our substrate had a part in making the holidays more special for the children and families who couldn’t celebrate at home truly warms my heart,” says Kim Kotel, GPA’s Business Development Manager who works with DCG ONE. “I’m proud to be part of a company whose culture supports projects like these and attracts partners with equally charitable spirits.”

Midland Participates as Sponsor of thINK 2022

How Pebble Paper Can Stand with the Biggest Brands