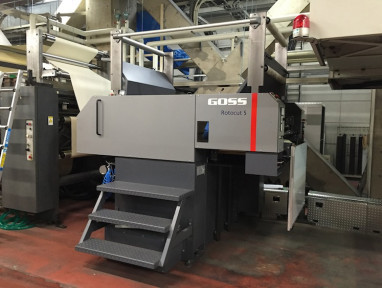 Goss International engineers from its Singapore headquarters project managed the operation to extend the capabilities of the ten-year-old M-600 press which involved re-configuring to enable sheeted production as an alternative to running the existing folder. A new VITS sheeter was installed between the press and folder, and a web path was created to allow simple switching from sheeter to folder. At the same time, quality and efficiency enhancements were introduced including a controls system upgrade and color registration system, as well as the replacement of infrared drying with LED UV. The 38" (965-mm) wide M-600 web press now features two LED UV units from Air Motion Systems positioned above and below the web.

The enhanced configuration has been in production since the end of 2015 and is now fully operational. According to Kinmei, the company has already benefitted from new efficiencies in both time and energy — ultimately improving the bottom line. Since installation, the faster drying process has produced 30,000 finished sheets per hour. The new configuration has also achieved massive improvements in energy efficiency, delivering up to 70% reduction in energy consumed during this period.

The new production flexibility and efficiency of Kinmei’s M-600 configuration means the company has been able to expand their print service offering. Whilst the Goss M-600 press is over ten years old, according to Shiro Tsukada, President, Kinmei, the press continues to deliver print quality of the highest level — now having been further boosted with the new UV drying system.

"We have been extremely impressed with the consistency and longevity of the M-600 over the years, and we are delighted to see the additional improvements that the new UV dryer has provided giving the press a new lease of life," explains Tsukada. "With LED-UV drying, not only have we been able to substantially increase productivity, but have also been able to minimize many of the concerns associated with our previous infrared dryer, such as cockling, fluting or brown paper. We are now matching the quality of sheetfed output with perfectly flat sheets, while still benefitting from the much greater speed and productivity of web offset production. We are extremely excited to see the continued benefits of the new installation over the coming months and years."

Tim Mercy, managing director, Goss Asia Pacific, also adds, "Kinmei Printing Co. is a highly valued and long-standing Goss customer, and we are committed to innovating and pushing boundaries to ensure that our customers’ products remain at the forefront of the industry in terms of effectiveness and productivity. We are pleased to have enabled Kinmei to build its print capabilities and deliver best-in-class service to its customers. As word of mouth spreads the news of the massive gains they are achieving, we look forward to being able to help many more of our customers in the same way."