In a unanimous ruling today, U.S. International Trade Commission (ITC) commissioners determined that U.S.-based manufacturers of uncoated groundwood (newsprint) papers are not being materially injured or threatened by Canadian newsprint producers, ending the antidumping and countervailing import duties that were being assessed at the border. Reversing the earlier ruling made by the U.S. Department of Commerce (DOC) in favor of import tariffs that, in some cases, amounted to a whopping 32%, the ITC vote marks a major victory for U.S. newspapers, book printers and publishers, as well as small businesses that rely on printed advertising inserts, circulars and flyers.

The ITC ruling (its report will be made public Oct. 8) effectively ends these tariffs and, according to the Printing Industries of America (PIA) - which actively opposed and lobbied against the tariffs - funds collected to date will be reversed over a period of three to six months. "After analyzing the facts, the ITC has issued the right decision to protect American jobs across the country. The printing industry can now breathe a sigh of relief," said PIA President and CEO Michael Makin. 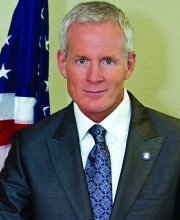 PIA President and CEO Michael Makin was an outspoken critic of the import tariffs.

"Today’s victory demonstrates the powerful results the printing industry can achieve when we flex our political might," Makin added. "In the face of the threat to 600,000 American jobs in the newspaper, retail, printing and publishing industries, PIA joined forces with a broad and diverse coalition to pursue all available avenues to advocate that public officials help put an end to the tariffs."

A groundswell of support against the tariffs, Makin noted, included a petition signed by more than 11,000 Americans from all 50 states. More than 150 members of Congress also expressed opposition to the tariffs by sending letters to key Trump administration officials; by testifying at hearings conducted by the ITC and DOC; and/or by co-sponsoring similar congressional legislation that was being drafted in both the House and Senate. In addition, both the Teamsters and the Communication Workers of America drafted letters opposing the tariffs.

As one might expect, the lone petitioner that filed the complaint in the first place - Longview, Wash.-based North Pacific Paper Corp. (NORPAC), which is owned by a U.S. hedge fund - was not happy with the ITC ruling. NORPAC is one of four U.S. newsprint paper manufacturers still remaining in the U.S., but was the only one to file an antidumping complaint.

"We are very disappointed in the ITC’s negative determination, given that the record clearly shows that the domestic industry has been materially injured by dumped and subsidized imports from Canada," commented Craig Anneberg, NORPAC CEO. "We intend to review the ITC’s written determination when it is issued, and we will assess our options at that time.”

Anneberg pointed to the DOC countervailing duty and antidumping determinations on Aug. 2 that indicated Canadian uncoated groundwood paper producers were being subsidized by an average of 8.54%. The DOC ruling also determined that Catalyst Paper, in particular, was dumping Canadian-produced newsprint in the U.S. market at up to 16.88% less than fair value, NORPAC emphasized.

But, in the end, conventional wisdom prevailed and the ITC made the proper ruling in striking down the tariffs. As noted by a coalition called STOPP (Stop Tariffs on Printers and Publishers) that had been formed in opposition to the tariffs, NORPAC's claims of infringement were unfounded on several fronts.

For example, STOPP pointed to an ITC report issued last September that recognized that newsprint tends to be supplied by producers in that region, and that pricing subsequently reflects the regional marketplace. The report also found that almost 91% of imported Canadian newsprint comes into the Midwest and Northeast, while only 4.6% enters the Pacific Northwest - where the state of Washington-based NORPAC conducts business.

In addition, the demand for newsprint in North America has shrunk by 75% since 2000, primarily due to the digital alternatives that are impacting newspaper publishers, but not due to any weakened demand caused by imported Canadian newsprint. Since 2007, 78 paper machines have been closed or converted, according to the coalition, eliminating more than 10 million metric tons from industry production capacity.

Now, following today's ITC ruling, U.S. newspapers that have survived the digital onslaught can get back to normalized paper pricing and supply - and, as a result, have ample cash flow to more properly support their editorial newsroom and pressroom production staffs.