Get Inspired! A Little Dabba Will Do Ya

Restaurants of all shapes and sizes can benefit from a collaboration with a local print provider.

Dabba wanted to create an impactful look for this new restaurant. The space itself on Stevenson Street was unique, according to Speedpro Imaging – Marin’s owner, Steve Moran-Cassese. The long and narrow restaurant space with 35’-high ceilings offered an oversized canvas “which came to life with a 25x70’ dynamic wall mural that made an immediate impression and reinforced the upscale nature of Dabba as a fast-casual restaurant,” said Moran-Cassese. Additionally, the skylights allowed all the offices of the 30+ story building next door to see the entire mural.

The design of the dining room called for a grey landscape with warm accents inspired by Indian spices, like turmeric and paprika. But the grey and orange colors proved challenging. “We ran many color tests to match the grey and orange is one of the most difficult color to match with CMYK,” said Moran-Cassese. “But after some color management, we hit the color.” 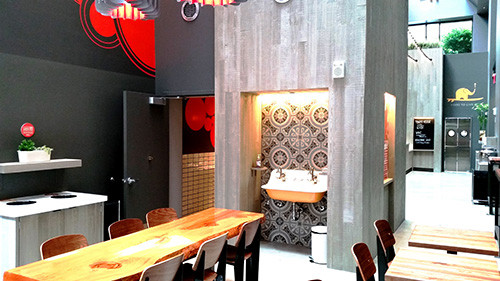 With low-VOC paint now being the standard in Califronia, Speedpro Imaging – Marin had to be very mindful of how paint would affect a wall project, especially one the size and scope of Dabba. “Fortunately, we were brought in to the project early, so we recommended that the contractors use STIX primer for the wall finish,” said Moran-Cassese. “STIX is a print studio’s best friend in that it is formulated to be receptive to vinyl so we had no issues with adhesion.”

Over the course of five months, Speedpro Imaging – Marin worked hand-in-hand with Dabba’s design team to tweak the artwork and periodic site visits allowed the team to review additional elements that could impact the areas in and around the wall. 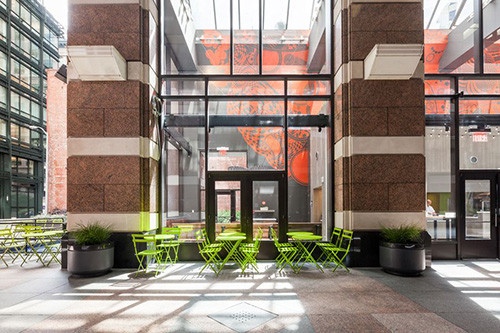 Speedpro Imaging – Marin printed the graphics for Dabba on its HP 280 latex printer on 3M 180cV3 / 8520 matte laminate film. Speedpro also handled the complex graphics installation. “Due to the height of the mural, the massive beams running from wall-to-wall and angled wall sections all coupled with limited space for scaffolding on a narrow second floor, the installation was complex.”

On opening day in July 2016, Dabba showcased not only its unique cuisine, but its new bold look. Dabba was thrilled with results and the oversized mural provided a critical ‘statement’ for the restaurant.

Installers to Gain New Skills at the Expo