Get in the Game: Printing Opportunities from Secondary Schools

School pride. For institutions across the United States, both large and small, school spirit can mean opportunity for wide-format printers. And while many colleges and universities have their own in-plant operations for graphics, the same can’t be said for the secondary schools — large and small — that educate our children from coast to coast. 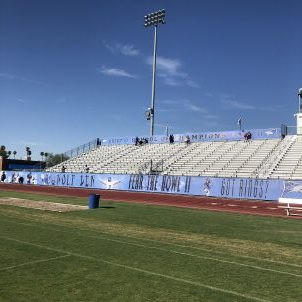 Sports fields are a popular choice for school graphics packages. At Chandler High School in Arizona, bluemedia worked with the school to create eye-catching banners, and helped keep costs down by having student athletes help witht the installation process.

“There is a good opportunity here, especially if you’re a smaller sign shop,” notes RJ Orr, bluemedia’s EVP and partner. “This is especially true if you do things other than just wide-format printing.” He notes that most schools need banners and signage, absolutely, but they are also always looking for things like flyers, T-shirts, or other products that a well-rounded shop can provide. And becoming a reliable resource can be a lucrative ongoing business.

With that said, what types of products are most schools really looking for? Orr notes that perimeter fences for the sports stadiums is probably the single biggest category, with many local high schools wanting to provide the same high-end feel to their teams as a college would, within reason. With that said, he notes, PVC mesh or scrim vinyl are probably the single most popular materials he prints on for his local high school projects, with a pressure-sensitive vinyl coming in third.

And installation is something else he works with the schools on to help keep costs down. He recalls one instance where they got the students involved. “Chandler High School (Arizona) wanted to showcase their team. The whole football team came out to help with the installation to help save cash. That was kind of cool [to be part of],” Orr says.

He stresses that schools don’t typically have huge budgets, and the print projects they do tackle tend to center around the athletic teams. “Football is the predominant one,” Orr notes. “Typically, because it has the biggest booster clubs. That’s who pays for [these print projects] — the alumni.”

Weight rooms are another location that tends to see graphics installed, along with locker rooms for various teams. That said, Orr adds that banners in general are another item that many schools look to take advantage of. “We do a lot of senior banners,” he says, which are banners hung of the current senior class, typically for more predominant members of the class such as the football players or cheer team. “We have a photographer take pictures of them, and then create individual banners that get hung up around the school. And then those kids get to keep them after the year is over.”

Other projects Orr has worked on for schools include things like wrapping the band transport buses or creating the signage for charity events the schools might put on to help raise funds for various projects and improvements. In fact, he notes, “Chandler does an annual football tournament, and we always donate the signage.” It is a good way for a shop to build connections and goodwill in the greater community, beyond just contributing to the bottom line.

The biggest reward though, Orr says, is seeing how the kids themselves react to the graphics. “It’s rewarding to see the kid’s reactions when a project gets done. If we’ve done their locker room, for example, it goes a long way. For example, we recently did a project in a lower-income school district — the coach there used to be at Hamilton High School (Arizona) which is more affluent, and then he took this job. He raised the money to have the entire weight room redone — new equipment, new flooring, and we did all new graphics. They kids were just floored by how it all turned out and seeing them all pumped up after it’s all said and done was amazing.”

So how does a local shop get involved with their local high school programs? Orr suggests starting with the athletic director for the school, rather than going to a principal or district manager. “Say, ‘Hey, this is what we do,’ and see if they have any print projects they’re looking at or see if they want to get some numbers so they can talk to their booster club about raising money. That’s where you start. After that, a football coach or a booster club president are also good resources but start with the athletic director if the school has one.”

Because of that structure, however, expect there to be “a lot of cooks in the kitchen as far as decision making is concerned,” Orr says. Because schools are a public entity, there will be a lot of people weighing in on what projects take priority, what the design should be, and who is going to ultimately pay for it. So go into the process with that in mind, and be prepared to present your ideas multiple times, and have designs change several times before the final sign-off.

With all that in mind, Orr still says that if he was running a local sign shop, he would probably be content to focus just on high schools for his business. “You could literally make an industry going around to the local high schools, boosters, and athletic clubs,” he notes. “There are a lot of pockets of money to do small things. If I had a smaller shop and just wanted to have fun, I would just do high schools. It’s a lot of fun, and you can make a decent living at it if you’re in the right area. There is just a lot of opportunity in high school graphics packages.”