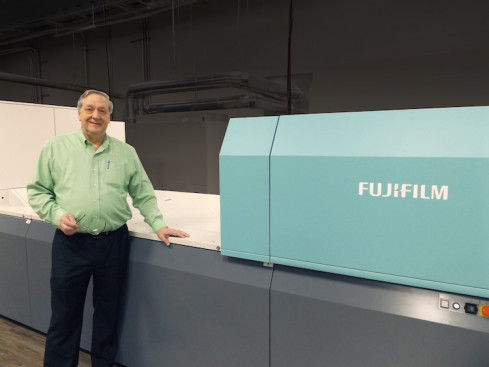 “The J Press 720S is almost the culmination of what I’ve seen coming for years,” says Raymond Ballew, VP of administration, Floor Productions. “I knew digital printing would be taking over someday. With the digital inkjet technology, I believe there will come a day when litho will be more-or-less obsolete. Fujifilm’s J Press 720S is a giant step in that direction.”

Russell Green, J Press 720S operator, Floor Productions, also comments, "On the J Press, we get better quality, and better color. The registration always holds tighter, and the color’s going to be there, all the time. It’s very consistent. On conventional offsets, there’s ghosting, and the struggle of getting your ink keys set. You can have a big solid (here) and then you’ve got a 40% screen drag behind it; and you’re not going to be able to hold it and still make that solid look as consistent throughout the run, because you don’t have that balance. With the J Press 720S, we don’t have any of those worries.”

Ballew adds, "Even with a target Delta E of three or under, running offset, it’s not uncommon to have color fluctuations off the Delta E target across the sheet. With the J Press 720S, you just don’t have that problem.”

With a 29.6-inch x 20.9 inch sheet and an output of 2,700 sheets per hour, Fujifilm’s second generation sheetfed J Press 720S is an ideal solution for printers like Floor Productions who are looking for a product that features the quality and robustness of an offset press, and the versatility to handle even the shortest of press runs.

On their very first day of production with the J Press 720S, 12 jobs were processed in roughly two and a half hours. On an offset press, Green could have run approx. two to three of those jobs within the same time, thus experiencing upwards of a 75% improvement in productivity for short run jobs. Floor Productions is also minimizing labor per job and eliminating make-ready waste, allowing for significantly improved margins.

“Not only are my customers happier because we’re getting their finished work to them more quickly, but the quality of the output on the J Press is often better than offset,” says Ballew.

Ballew and his colleagues visited Fujifilm’s Americas Technology Center in Chicago, prior to purchasing their J Press. They were prepared with a long list of questions, and sample files ready for production, along with the mindset of ‘you either change with the times, or you fall behind.’

“After a very thorough hands-on demonstration with the J Press 720S, at the end of the day Reid Childress (Floor Productions’ president) and I were blown-away, and frankly surprised at how impressed we were. After that initial visit we had zero doubt about buying it. We knew it would pay for itself very, very quickly. We didn’t buy it for bragging rights, we bought it because it fits,” explains Ballew.

With a half-size format and a production speed of less than one second per sheet, the J Press 720S opens up new opportunities for any short-run, general commercial printer. For press runs of a couple of sheets or several thousand, the J Press 720S allows you to compete for more of your customers’ branding business by dramatically lowering operational costs and reducing turnaround times — all while boasting offset-quality and superior color consistency throughout the run.

Dalton, Ga, nestled in the foothills of the Blue Ridge Mountains, is home to many of the world’s largest floor covering manufactures. Floor Productions is a premier supplier of product marketing tools within this industry, manufacturing a broad range of products from architect folders and merchandising boards to large format point-of-purchase graphics and fixtures. Within its nine facilities, the company also specializes in sampling hard surfaces, which makes them a complete turnkey supplier to its customers.

In the print industry since 1970, Ballew has experienced innovations in technology over the years, and is pleased their J Press is enhancing its business. Floor Productions also utilizes Fujifilm Superia LH-PJ plates, and for the past 10 years has ‘never experienced a defective plate.’

“In my 47 years in printing, there’ve been a lot of changes, but the J Press by far has been the most exciting thing I’ve ever seen, and I’ve seen a lot,” concludes Ballew.