From Radebeul, Germany, Out Into the World: 100 Years of Sheetfed Offset

In early summer 2022, Koenig & Bauer will be reflecting on a very special anniversary: it is exactly 100 years ago that the manufacture of sheetfed offset printing presses began in Radebeul. That this came about at all, and the fact that the former Dresdner Schnellpressenfabrik placed its faith in this new printing technology at such an early stage, is a tale of courage, vision and enthusiasm for technical innovation.

Following the invention of the offset process by Ira Washington Rubel and Caspar Herrmann, the first company for offset printing press manufacture in Europe was established by George Mann in Leeds. The owners of the Leipzig-based press factory Schwiers, Werner & Stein purchased the relevant patents from Mann’s company, thereby becoming the first manufacturer of sheetfed offset presses on the European continent. The company offered various single-colour offset presses from 1910 onwards, including its “Leipzig” series at a later date. From 1920, this model was built in series of six and ten presses.

In 1921, Schwiers, Werner & Stein adopted the new name Leipziger Schnellpressenfabrik. Shortly thereafter, it was merged with its Dresden-based counterpart to form what was later to become the Dresden-Leipziger Schnellpressenfabrik. This saw a number of experienced design engineers, along with a few skilled factory workers, switch from Leipzig to the new factory in Coswig. The production site for offset presses was relocated to the Elbe valley in 1921/22. It was only later – in 1924 – that Dresden-Leipziger Schnellpressenfabrik was entered in the local company register. This company experienced robust growth and soon incorporated its widely recognized brand into the new name of Druckmaschinenwerk Planeta. Following German reunification, finally, it became Koenig & Bauer's current location in Radebeul. 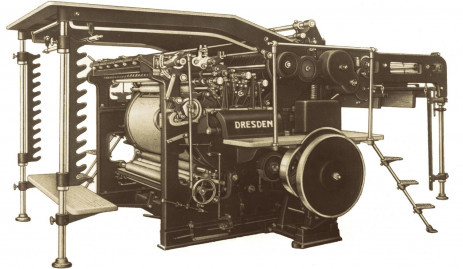 The “Leipzig,” which was built at Dresdner Schnellpressenfabrik from 1922 on, and the perfecting press “Dresden” were among the first new developments.

Initially, production of the “Leipzig” continued in Coswig. From 1922 on, two-colour presses and a new one- and two-colour perfecting press were also produced using the English design. The first of these new presses was delivered to a customer in Hannover in June 1922. The company's business with sheetfed offset presses expanded continually during the 1920s – which was when a name that would become a familiar one to everyone in the industry for many years to come was heard for the first time: “Planeta”.

90 years ago: From two- to four-color printing

In 1928, the designers came up with a new, tandem-style sheetfed offset press. The two-colour, five-cylinder press was given the name Planeta Quinta and was the latest machine to join a long list of successful sheetfed offset models from the Elbe valley.

Ahead of its time: the Planeta Deca, the first four-colour sheetfed offset press from 1932.

The idea of placing two of these printing units one behind the other and then realizing sheet transport between the two by means of a system of chains and gripper carriages gave birth to the next innovation: the first four-colour sheetfed offset printing press. Built in 1932 – in other words exactly 90 years ago – it was unveiled at the TPG trade fair in Paris under the name Planeta Deca. The papers, inks and other materials available at the time were still not properly suited for wet-in-wet printing with four colours. Even so, the press was sold to a Paris printing company after the fair, where it remained in use until 1966. The Planeta Deca may have been ahead of its time, yet it managed to define a path for future developments in offset printing.

For a time, no new innovations emerged from Druckmaschinenwerk Planeta – as Dresden-Leipziger Schnellpressenfabrik had been renamed in 1938 – as almost all the remaining production facilities had been dismantled and removed as reparations after the Second World War. This drought ended in 1957 with the development of a four-colour press with enhanced performance, the Planeta PVO. With a top speed of 9,000 sheets/hr, and 7,500 sheets/hr in continuous operation, it caused quite a stir at the Leipzig Trade Fair in 1960.

The Deca provided the basis for development of the Planeta PVO in 1960: the new press achieved a top speed of 9,000 sheets/hr.

By this time, however, the engineers in Radebeul already had more new ideas in the drawer. They were working on and testing a unit-based press using a three-cylinder system with double-size impression cylinders and transfer drums. The Planeta Variant was presented for the first time at the Leipzig trade fair in 1965 and was, in many respects, a pioneering development. The design principle of these first Variant presses gradually replaced the five-cylinder system that was previously in use, and shaped the continued development of sheetfed offset presses worldwide. Today, practically all presses manufactured all over the world are based on this principle – albeit with constant refinements, of course. The Variant was followed by the Super-Variant, the Varimat and the Varitrend. From 1968 on, it was possible to incorporate a convertible perfecting unit into the unit-based presses. That, too, was a Radebeul invention.

The arrival of the Planeta Variant in 1965 revolutionised sheetfed offset printing. Its unit-based design principle is still the industry standard today.

The Super-Variant and Varimat series were two of the most important further developments in unit-based press design.

A design principle without alternative

What happened next is common knowledge for industry insiders. Sheetfed offset presses grew longer and longer. The standard printing units were joined by coating towers, intermediate drying units and extended deliveries for comprehensive final drying installations, and later by further special units for increasingly complex inline finishing of the print products. Control consoles took on more and more functions and simplified quality monitoring for the printer. Printing speeds have since doubled and today’s presses run at 18,000 and 20,000 sheets/hr. In 1982, Planeta presented a large-format Super-Variant in a seven-colour configuration with perfecting after the first unit. A nine-colour press followed in 1985, and then a ten-colour model in 1986. For many years, the latter was the longest sheetfed offset press in the world.

The merging of the Radebeul factory into the Koenig & Bauer Group ultimately gave the impetus for the success story of the Rapida series. The presses stand out with sophisticated and complex functionalities. Today, it is a medium-format Rapida from Koenig & Bauer that holds the record for the most printing and finishing units in a single press. There are 19 in total. Numerous other presses have been supplied with 18 and 17 units.

Sheetfed offset today with a Rapida 106 X – comprehensive inline finishing capabilities and production speeds of up to 20,000 sheets/hr.

As developments have shown: thanks to constant innovation, what began as a relatively simple technology 100 years ago can, even today, still be considered a technology with a future. Koenig & Bauer is the only manufacturer able to offer printing and post-press solutions for the entire packaging workflow. This is a market that continues to grow. Sheetfed offset presses will therefore still have their rightful place in printing companies around the world in the years to come. And many of them will also be “made in Radebeul”. Just like 100 years ago.