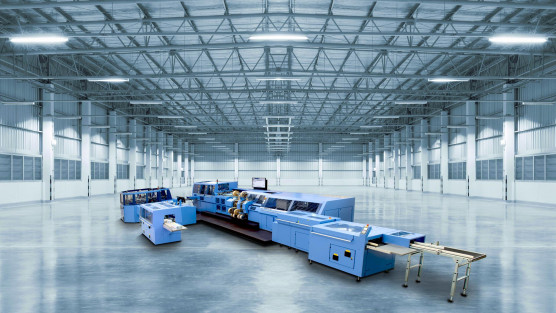 HAUPPAUGE, N.Y. - May 18, 2018 - Whether due to their gift appeal, share-ability, or physical touch, readers the world over are becoming more and more bullish about the benefits of a printed book. Thus, Friesens Corp., a 100-year-strong manufacturer of yearbooks, coffee table books, and general interest titles, recently replaced an older casing inline system with a highly innovative bookline that significantly improves efficiency and production.

As a long-time client of another major finishing brand, Friesens embarked on an extensive fact-finding process which included in-depth meetings with other finishing manufacturers, as well as on-site demonstrations to determine the best equipment for their bookbinding needs. Their decision? In January, they made a significant change in their facility by installing Muller Martini’s Diamant MC Casing-In System whose innovative technology far exceeded their current line.

Mark Friesen (no direct relation to the parent company), Corporate Bindery Manager, noted, “The continued upswing in book manufacturing compelled us to improve the efficiency of our bookbinding operation. We have had a long-standing relationship with one of Muller Martini’s competitors. But, we were curious to see what Muller Martini offered, and their team was extremely knowledgeable and well prepared and took us to numerous sites to watch the Diamant MC perform in action. That, combined with the bookline’s unmatched technology features, sealed our decision.”

Said Mr. Friesen, “In most cases, with the Diamant MC, the first book coming off the line is salable. So, there’s basically no waste. The way we produce books today is better and faster than in the past.” In addition, unlike Friesens’ previous system, the Diamant MC Bookline enables operators to queue backlogs of upcoming jobs, greatly improving the flow of product on the machine. Friesens also purchased the Diamant with a time-saving in-line ribbon machine whereas the older line would either add ribbons by hand or utilize a standalone machine.

Switching to Muller Martini’s Diamant MC Bookline has been a welcomed change - and one that was also influenced by a 30-year Friesens’ casing-in operator who participated in the company’s discovery process and watched the machine perform live. According to Mr. Friesen, “He was a huge proponent of Muller Martini’s technology and felt it was much better than the old line. And, he’s now able to communicate that message directly to his fellow operators.”

Envision Adds Equipment for Use by Vision Impaired