'Fold of the Week' Celebrates 500-Episode Milestone with Special Giveaway 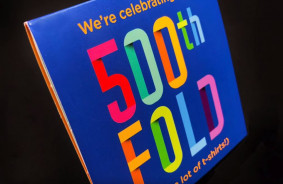 This morning, Trish Witkowski of Foldfactory.com will go to the Foldfactory channel on YouTube and upload the 500th episode of her well-known video series “60-Second Super-Cool Fold of the Week.” In doing so, she will also celebrate 10 years of shooting the groundbreaking vlog series that is enjoyed by tens of thousands of designers and print industry professionals around the world.

In anticipation of the upcoming milestone, she reached out to long-time Foldfactory sponsor Structural Graphics to design a new and exciting format to feature on the 500th episode — with plans to distribute samples for free in limited edition to the audience. “I wanted to do something special, so we gave ourselves a lot of time to explore ideas,” states Trish, “I was very particular about the fact that the format had to be exciting and new, but also in the public domain so that anyone could produce it.”

The team at Structural Graphics went to work and pitched several ideas to Trish, who ultimately chose a new format they called “The Roundabout.” The final plan involved designing a commemorative piece, and then producing 500 samples to distribute to 500 lucky viewers. In an effort to include everyone in the celebration, and to inspire the production of this exciting new format, Foldfactory.com and Structural Graphics together decided to offer the Roundabout production dieline as a free download for all.

“We’ve always appreciated Trish’s excitement, enthusiasm and support when it comes to pushing the boundaries of what paper can do,” commented Structural Graphics CEO, Kevin Gilligan. “It’s a thrill to have one of our designs commemorate her 500th episode.”

When it was time to produce the commemorative design, Witkowski contacted industry friends at Sappi North America. “Sappi has been with me for close to nine years, and they have been a big part of my growth and evolution over the years,” said Witkowski. “So, in my mind the commemorative piece had to be printed on Sappi paper.”

“What Trish has done this past decade educating the industry on folding innovation is impressive. Her specialized expertise paired with her successful platform provides endless inspiration to us all,” said Patti Groh, Director of Marketing Communications for Sappi North America. “We were privileged to work with her on our Standard 4 guide on folding and scoring, one of our most requested thought leadership pieces to date, and we look forward to continuing our collaboration with Foldfactory as we celebrate the accomplishments and legacy of this industry staple.”

The final product was digitally printed on Sappi McCoy Silk Digital for HP Indigo 100-lb. Cover, diecut and scored, glued, and then hand folded by the team at Structural Graphics.

Many have asked Trish about the future of the series, and whether or not she plans for episode 500 to be her last. “There’s such a loyal viewership to the series,” she states, “and I feel that my work serves as an important resource for the industry. I also have tremendous sponsorship support in Structural Graphics and Sappi North America, along with Standard Finishing Systems, AccuZIP, and my media partners NAPCO Media, Printing News, and PrintMediaCentr. So, as long as there is great work being done, and an audience that wants to watch and interact, I’m going to keep “Fold of the Week” going.”

To view the 500th episode, to request a free sample of the Roundabout, and to download the Roundabout dieline for free, visit: www.Foldfactory.com/pages/episode500

To view the rest of the “Fold of the Week” series, visit https://www.youtube.com/foldfactory