Not long ago, this San Francisco Bay Area company found itself temporarily operating as one of the largest thrift-store clothing businesses on the West Coast — but that’s a story for a bit further down in their profile. During the 2020 election year, AdMail Express was busiest doing the same thing it was founded to do in 1973 by Bruce Schott and Phil Schott, the father and uncle of Brian M. Schott, the current president and CEO: printing and mailing for political campaigns. 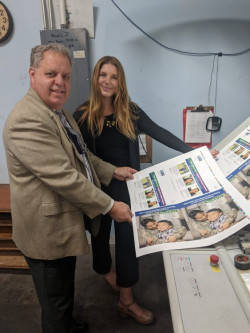 Reviewing a campaign mailer printed on a Heidelberg Speedmaster SM 74 at AdMail Express are Brian M. Schott, president and CEO, and Jordi Oliver, a recent graduate of Cal Poly’s graphic communications program who works for Schott (another Cal Poly alumnus) in sales and marketing.

“It consumed us,” says Schott, who reckons the company produced 3.5 million mailing pieces in an election cycle that peaked from mid-September through the end of October. The clients were political consultants and PACs, and their schedules, with the election day deadline looming, were frantic.

“They would come to us on Saturday, expecting us to produce on Saturday,” Schott says, adding that the company was also called upon to produce election-related door hangers and signage. “I doubt that we ever had more than 24 hours to do the work.” But, he notes that despite the pressure, “we missed zero mailing dates.”

For a political printer, this kind of stress is well worth enduring. As a unionized printing business, AdMail Express is in regular demand by political groups because it can furnish the coveted union “bug:” the tiny label that certifies the printing was done by members of a labor union. The fact that California now sends vote-by-mail ballots to all of the state’s registered voters means that political direct mail campaigns have to be thorough enough to reach every eligible voter in a given household.

The resulting need for multiple, precisely targeted mailings “made it more lucrative” to be in the political printing business in the Golden State this year, Schott observes.

Solid Base of Contracts

Political campaigns are seasonal, and producing mailings for them is far from being the only source of revenue that AdMail Express enjoys. Specializing in direct mail and fulfillment, the company also serves not-for-profits, educational institutions, the travel industry, and, in particular, government agencies, from which it gets about 40% of its volume in the form of contract work.

One such project was a year-long engagement to print and fulfill 181 teacher and student classroom kits consisting of 540 different components: a job totaling more than 25 million pages printed both conventionally and digitally. AdMail Express bids for work of this type as a pre-approved vendor to the State of California and as a qualified supplier in county vendor pools.

With a staff of 19, the company operates out of a 33,000-sq.-ft. plant that Schott says once housed a beer distributorship owned by the late Joe Morgan, the Cincinnati Reds Hall of Famer. The equipment is a mix of sheetfed offset presses and digital devices that include a five-color Heidelberg Speedmaster SM 74 and a Canon imagePRESS C8000VP color digital press, both of which were brought in to handle the shop’s growing volumes of political and contract work.

Schott has also boosted productivity with investments in software, most notably the Midnight MIS from Print Reach: a cloud-based print and mail management system that he says proved indispensable for staying on top of the workload during the 2020 election cycle. He has also adopted a Web-to-print e-commerce solution from Print Science.

Schott, a graduate of the renowned graphic communications program at California Polytechnic State University (Cal Poly), believes that “having that absolute flexibility, that can-do attitude” is what distinguishes AdMail Express and continues to drive its growth. In his opinion, printing companies sometimes lose by being “too structured” to take full advantage of the opportunities that come their way. There are no such constraints at AdMail Express, says Schott: “we just do it.”

The company’s flexibility was on full display in its fortuitous, but commendable, venture into the thrift-store space. Thrift stores operated by charitable organizations solicit donations of used clothing that they then resell to domestic consumers and to customers overseas.

As Schott tells the story, one such organization, a small, faith-based group for which AdMail Express printed millions of postcards per year, became so overwhelmed with donations that it wanted to exit the activity — a move that would have done away with the need for the postcards.

Schott’s answer was take over the logistics for the customer, using AdMail Express personnel to make the pickups. The company then resold the used clothing by the pound to brokers and other buyers, generating cash to keep the charitable work going and the relationship with the customer intact.

It wasn’t a permanent arrangement but, while it was in effect, it worked out well. Because of the unusual nature of the service provided, Schott says, “at one point, we were our biggest client.”

He believes that flexibility and “situational awareness” of new opportunities in a changing industry are what will keep AdMail Express profitable in the years ahead. He has hired young talent, including Jordi Oliver, a recent Cal Poly graduate now working in sales and marketing, to help him build the forward-looking business strategy the company will need.

If that means continuing to pivot in new directions, so be it. “We don’t wait for things to turn around,” Schott declares. “We’ve pivoted long before pivoting was cool.”