Flashback Friday: Otto's Night Watch, 'You Can Better Yourself' 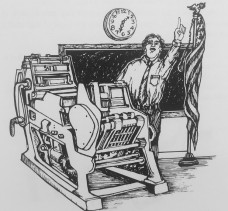 Here’s the next installment in our continuing series of republished “Otto’s Night Watch” columns by Otto Boutin, which appeared monthly several years ago in Printing Impressions. Written in Otto Boutin’s typical humorous style, it does carry a message about the higher calling to teach printing — and life skills, in general — to the next generation, as well as about the power of the printing press in a democracy. Enjoy!

You Can Better Yourself

Occasionally every Linotype operator suffers a fit of insanity. He develops a yearning to wear a white shirt and a necktie. And he wants to carry a briefcase. He says good-bye to the grumpy old Linotype and goes out to conquer the white collar world.

Old Man Moses was such a Linotyper. After 40 years at the machine he decided to try a new career. He bought a briefcase and became a teacher.

“My secret ambition,” he replied. “Ever since I dropped out of grammar school I’ve wanted to be a teacher. I’ve been studying in my spare time.”

“But you’re taking a big cut in salary,” I protested.

“Money isn’t everything,” said Old Man Moses, with a dreamy look in his eyes.

His mind was made up. He got a haircut and bought six white shirts. Then he added up his credits from the numerous colleges he had attended during his wanderings. There was medieval history from CCNY, modern poetry from Northwestern, Balkan anthropology from Berkeley and scientific hog breeding from the University of Iowa. By mixing all these ingredients he came out with a certificate that entitled him to teach offset printing.

“I’m as surprised as anybody,” he confided to me. “I’ve never run an offset press in my life. But I’ll learn fast. After all, it can’t be more difficult than Sanskrit.”

In bouncing around newspapers all over the country, Old Man Moses had seen presses half a block long. Now he was in charge of a press no bigger than a peanut stand. But he grew proud of it.

“This little press,” he told students, “can save the country from tyranny. It is with presses like this that democracy can be preserved. The big presses, like radio and television, will be the first to fall under a dictator’s control. But these little presses, hidden in barns and basements, will keep carrying the torch of freedom.”

Old Man Moses paused to let his eloquence sink in.

“Our basement got a leak,” said one of the boys. “When it rains we need a rowboat.”

One boy raised his hand.

“I gotta go to the washroom,” the boy replied.

“As I was saying,” he continued, “the small press is the guardian of democracy. It won our freedom in the past and it will preserve our freedom for tomorrow.”

“Tomorrow I gotta stay home,” a boy interrupted. “I gotta watch the kids. Ma’s gonna go downtown to look for a job.”

“Have her write it in Spanish.”

Old Man Moses studied the faces of the boys, hoping to find a spark of interest. But all the boys were looking at the clock. The bell shattered the silence and in 10 seconds Old Man Moses stood alone.

He shrugged tolerantly. He used to be a clock-watcher himself. Tomorrow he’d start the lecture earlier so that he’d get in the good points before the boys got restless. He would tell them how the Roman Empire was held together by papyrus, even as our own government is held together by millions of reams of paper.

A telephone rang in the closet.

“That man who visited the shop yesterday was an inspector. He filed a complaint in the district office.”

“Ink smudges on the side of your press. Black fingerprints.”

Mr. Moses paused as he tried to remember. Then he said, “The boys were cleaning the rollers when the inspector came in. They had ink on their hands.”

“I realize that, sir. But a fingerprint won’t hurt it. We clean the press at the end of the period. We take 10 minutes for clean-up.”

“Take a half hour, Mr. Moses. Get every fingerprint off the press.”

“But we need more time for teaching ...” 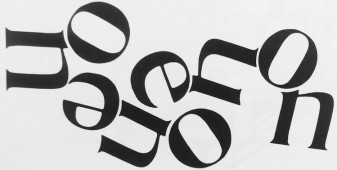 Old Man Moses went to look at the press. Yes, there were fingerprints on it. Carefully, he began wiping them off. The trouble with teaching, he told himself, it that you get involved with the kids. It’s easy to tell a boss to go to hell and walk out on him, but how do you walk out on your gang of kids? How do you walk out on Jimmie who has come to regard you as a father, the only father he ever had?

But you can’t keep wiping fingerprints off presses all your life. You’re a man and have to do a man’s work. You can’t be a wet nurse forever.

Old Man Moses tossed the smudged rag into a can and washed his hands. He glared across the room at the contemptible black briefcase, the symbol of an old man’s vanity. It was full of lectures about printing that he had intended to deliver. Now he realized that nobody gave a damn about anything. The kids came to his class just to waste time, or to do the boogaloo to the rhythm of the press.

He picked up the briefcase and decided to tell the principal that he was through. They could easily get a substitute.

He was at the door when little Pedro came barging in.

“Mr. Moses,” he shouted shrilly as he dug into a stack of printed paper. “Mr. Moses, I’m looking for some of that stuff I printed this morning.”

“What do you want with it?”

“I wanna show my mother the kind of work I can do. That’s real good printing, ain’t it, Mr. Moses?”

A smile crept across his teacher’s face.

“Sure is, Pedro. Tomorrow we’ll try some color work. Red and black on the same paper.”