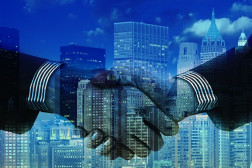 In this case, both the managing director of Veterans Capital and Contessa are Vietnam era veterans. Recently, Contessa had his eye on acquiring Fitch Group, a 130-year-old graphic communications company located in Manhattan. Veterans Capital has committed to supply the capital necessary for the purchase of capital equipment to be used in the planned expansion of the business and to act as the company's financial advisor.

Contessa says that 9/11 had a devastating impact for the company, as well as its customers: "And it would have stayed that way had it not been for the incredible loyalty of those long-time customers, loans and payments from NYC and FEMA and sheer grit! This money allowed Fitch to stay in business and reemerge at its new location at 229 West 28th street."

Contessa concludes, "Smaller than pre 9/11, for sure, but with the help of partners like Veterans Capital, as both a lender and financial advisor, we are going to fix that and grow Fitch to a multi-channel customer communications company larger than ever and we will do it in Manhattan. And there will be a Fitch on the team, John Fitch IV, great, great grandson of the founder, continuing this 130-year-old legacy well into the 21 Century."