It’s hard to believe PRINTING United Expo 2022 is literally just around the corner. After the high-energy and well-attended inaugural exposition held under the PRINTING United Alliance banner, which took place in Dallas back in 2019, the onslaught of the pandemic thwarted the ability to host subsequent live shows in Atlanta and Orlando in 2020 and 2021, respectively. But, thanks to now-weakened variants of COVID, the widespread availability of vaccines and testing, and social distancing best practices, the Las Vegas Convention Center will serve as the epicenter for the entire printing industry from Oct. 19-21.

Some are even coining this year’s expo in Las Vegas as the “drupa for the Americas” — a nod to the enormous German trade show in Düsseldorf, Germany, held every four years that, in its heyday, filled 17 halls. Having been to eight past drupa shows during my industry career, the sheer size, amount of equipment in operation, and total number of open exhibition days was remarkable.

But, despite the huge crowds of past drupa events, the amount of American printer attendees remained a low percentage compared to the overall number of show-goers from other parts of the world. The Las Vegas location for PRINTING United Expo will be a bigger draw for print providers based in North and South America, even though there will also be groups coming from Asia and Europe. Another draw: the 2022 Expo marks the first time ever that a U.S.-based industry trade show geared toward the commercial printing market will be held in Las Vegas. 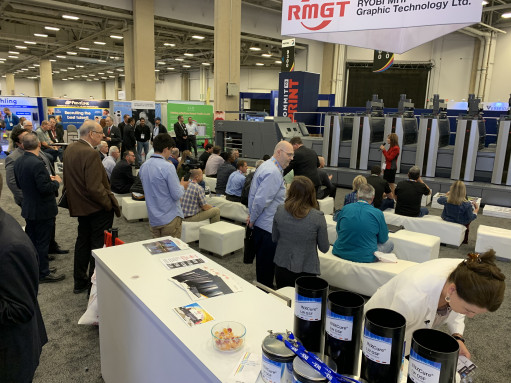 As a followup to its success at the Dallas show in 2019 (above), RMGT will be demonstrating an RMGT 970 four-color sheetfed offset UV-LED press live on the show floor.

With more than 700 exhibitors occupying one million total square feet within two halls, this year’s PRINTING United Expo will incorporate all market segments, including commercial printing; graphics/wide-format printing; mailing and fulfillment; packaging and labels; industrial and printed electronics; apparel decoration; textiles and décor; as well as promotional products. The expo’s under-one-roof approach to address all market segments reflects the convergence that’s been occurring throughout the graphic arts industry.

Whereas print providers once tended to stay in their lanes, the lines of demarcation have blurred significantly during the past several years as print providers seek new revenue streams and product line extensions. Some of that certainly can be chalked up to the lower cost of market entry that digital printing and finishing equipment have enabled, across a range of application segments.

A second key driver of convergence has been the fact that many segments of commercial printing have become overcrowded and commoditized from a pricing and customer loyalty standpoint, forcing commercial print providers to expand into areas such as direct mail, database management, labels and folding cartons, mailing and fulfillment services, and other products and services that can generate better margins and client relationships. HP Inc. will be running live demos of the new HP PageWide Advantage 2200 inkjet web press in its booth. There will also be several new products from other exhibitors running throughout the show floor.

Another key theme that will undoubtedly permeate this year’s PRINTING United Expo is our industry’s continued quest for greater automation. That effort to reduce human touch points, at multiple stages of production workflows — all the way from order intake, prepress and printing, to binding and finishing — has gained an even greater sense of urgency due to printers’ ongoing inability to attract and retain skilled labor. Printers have come to the realization that the job market for production workers won’t rebound, even if the economy falters in the coming year, nor are there enough young people entering the industry to keep up with attrition.

With so many industry conferences, user and peer group meetings, and trade shows that had to be canceled due to the pandemic, there surely is a pent-up demand for an event with the size and scale of PRINTING United Expo. Despite many event organizers trying to pivot with virtual online events the past two years, nothing beats the face-to-face interactions that occur during a live event.

I can’t wait to attend the expo in just a few weeks, which will be surrounded by the glitz and glamour of “Sin City.” Join me for what will be an exciting ride.

Reunited, and It Feels so Good

PRINTING United Expo is Almost Here! Here's What You Should Know

What Can the Packaging and Mailing, Shipping Communities Expect at the Expo?