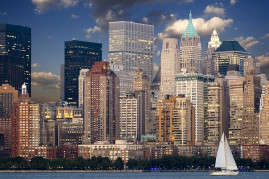 CARROLLTON, Texas - February 9, 2018 - FASTSIGNS International, franchisor of FASTSIGNS, the leading sign, graphics and visual communications franchise, announced today it has signed the first Area Representative Agreement in the company’s North American history to expand its footprint in New York City. As part of the agreement, Greg Carafello, president of Executive Franchise Group, LLC, will develop new FASTSIGNS locations in all of the city’s five boroughs, as well as oversee franchise development and provide operational support for the market throughout its ongoing growth. FASTSIGNS currently has two existing locations in Manhattan and Staten Island, with plans to develop more than 20 additional centers in the coming years.

“We are extremely excited to have Greg spearhead FASTSIGNS’ growth in the New York City area,” said Mark Jameson, EVP of Franchise Support and Development, FASTSIGNS International. “New York is one of the few untapped domestic markets in the U.S. and we believe there is a strong opportunity for the brand to develop there. We are confident that with nearly four decades of experience in the franchise and sign and graphics industries in the local market, Greg is the right person to drive our expansion in an area with so much potential.”

A franchising industry veteran, Carafello has extensive experience as a master franchisee for several additional leading brands, and currently serves as the master franchisee for Cartridge World with over 80 stores in eight states and 18 Liberty Tax’s in Manhattan. He began his career more than 37 years ago at Canon as a copier sales trainee, and rose through the ranks to become their youngest branch director at the age of 26. He and his wife went on to found their own company, AbraCadabra Color Copy Centers, which he sold after nearly two decades in business to focus on his franchising endeavors. As an area developer for FASTSIGNS, he will spearhead the company’s development efforts in New York City and provide support to new franchisees to ensure their businesses are successful.

“After spending decades in this industry, I’m thrilled to be joining one of the most respected names in franchising and number one in the signage segment. FASTSIGNS’ exceptional success over the past several years is a true testament to the company’s culture and the value of having a strong leader like Catherine Monson at the helm,” said Carafello. “I look forward to leveraging my extensive experience in franchising to drive FASTSIGNS’ expansion throughout New York City by identifying the right candidates for the brand, positioning them for success and supporting them throughout the years!”

This announcement comes on the heels of a year of exceptional growth for the brand, opening 43 locations in the U.S. and Canada, as well as three in the U.K. throughout 2017. In 2018, FASTSIGNS plans to open an additional 45 centers across the U.S. and is targeting aggressive franchise development in markets such as Greater New York City, Boston, and the Northeast Corridor, and throughout the West Coast including in Southern California and Arizona. Across North America, FASTSIGNS has over 400 markets ready for development. Internationally, FASTSIGNS is continuing to seek qualified candidates to grow its international footprint in target markets throughout the world, including Brazil, Quebec, North Africa, Southeast Asia, India, Europe, and Latin America.

FASTSIGNS International, Inc. was ranked the #1 franchise opportunity in its category and 70 overall on Entrepreneur magazine’s 2018 Franchise 500, the world’s first, best and most comprehensive franchise ranking. Acknowledged by entrepreneurs and franchisors as a top competitive tool of measurement, the Franchise 500 recognizes FASTSIGNS for its exceptional performance in areas including financial strength and stability, growth rate and brand power. Additionally, FASTSIGNS has been recognized for its franchisee satisfaction by being named a World Class Franchise by the Franchise Research Institute for five consecutive years and has been ranked by Franchise Business Review as one of the “Best of the Best” for franchisee satisfaction for the last 10 years. FASTSIGNS also was named a 2018 Best-in-Category Franchise by Franchise Business Review and was named to its “Innovative Franchises” list in 2017.

As part of the brand's development strategy, FASTSIGNS is also targeting co-brand and conversion opportunities whereby print shop owners can expand their services by adding FASTSIGNS to their existing business or convert their business into a thriving FASTSIGNS center.

For any existing business looking to expand into this fast-paced market, FASTSIGNS gives the added support and training needed to make the process smooth. Whether an existing print-based business or a photography studio, FASTSIGNS’ co-brand centers receive the same assistance as any new franchisee, with the added bonus of being able to exclude established revenue streams, outside of the FASTSIGNS core business offering, from future royalty payments. Both the co-brand franchise opportunity and conversion can be started with only $15,000 down on the initial franchise fee.