FASTSIGNS International, Inc., the leading sign, graphics, and visual communications franchise with more than 750 locations in nine countries worldwide, recently held its 2022 FASTSIGNS International Convention in Grapevine, Texas. Themed Building Your Future, the multiple-day event taught best practices as well as celebrated franchisee achievements and the continued growth of the franchise network in both sales volume and number of locations. 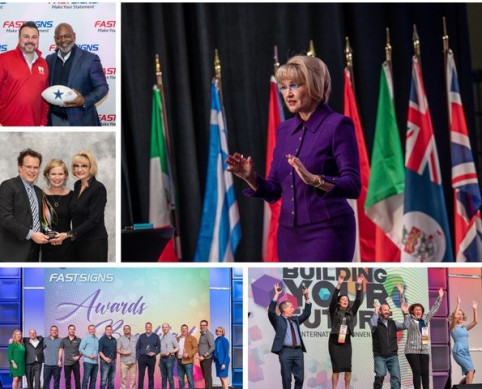 Attendees had the opportunity to participate in general sessions, educational sessions, peer panels and roundtable discussions. Highlights from the event included hearing from Emmitt Smith, the NFL’s all-time leading rusher of the Dallas Cowboys, Dancing with the Stars champion, and successful real estate investor.

Additional speakers included Trent Shelton, Former NFL wide receiver and now one of the most authentic and powerful voices in the area of personal development as an inspiring motivational speaker and author; Scott Greenberg, author of The Wealthy Franchisee; and Scott Bornstein, a memory expert and business author who is world-renowned for his brain-changing memory systems that unleash the brain’s ability to learn deep and fast, and achieve exceptional and enduring recall.

In addition, corporate team members educated franchisees in various breakout sessions, and attendees also had the opportunity to gain insight from a panel of high-profile vertical industry sign and visual graphic buyers at the Secrets of Success Customer Experience Panel.

Highlights from the 2022 convention include:

During each convention, FASTSIGNS hosts Breakfast with a Purpose, a Community Giveback project to make a difference in the community where the event is held. This year, FASTSIGNS worked with the Naval Air Station Joint Reserve Base in Fort Worth with a focus on addressing food insecurity. The Fleet and Family Services department at the base was in need of perishable items as well as hygiene products and baby care items, so the outreach from FASTSIGNS was perfectly timed. Together, FASTSIGNS franchisees and employees as well as the corporate staff at FASTSIGNS International Inc., along with vendor partners, helped support over 6,000 military and family members in the Ft. Worth area. Vendor partners included Avery Dennison, Click2Sell, Colex, Grimco, GSG, Ornamental Post & Panel, Plasticade, PromoMatting,  Ricoh, Sinalite.

“2021 was a record year for FASTSIGNS. Same center sales exceeded 16% in the US, 17% in the UK and 24% in Canada. The number of FASTSIGNS locations grew to a record 761 locations in nine countries” said Catherine Monson, CEO of FASTSIGNS International, Inc. “Our annual convention brings our franchise network together to recognize, honor and celebrate their many achievements, as well as to engage in educational and networking opportunities to kick off the year. This one-of-a-kind event enabled us to celebrate our connections through FASTSIGNS, and it set the stage for an even more successful 2022.”