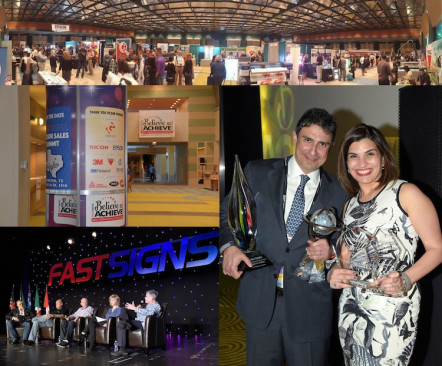 The theme of FASTSIGNS' annual International Convention "Believe to Achieve" spoke to the goals that have been achieved and the plans for FASTSIGNS in 2016.

The convention theme—"Believe to Achieve"—spoke to the goals that have been achieved and the exciting plans for FASTSIGNS in 2016. A recording-breaking 114 FASTSIGNS franchisees in four countries were recognized for exceeding $1 million in annual sales in 2015.

"It’s an honor to recognize locations from eight countries for superior performance and special accomplishments during our International Convention," said Catherine Monson, CEO of FASTSIGNS International. "We are poised to make 2016 our best year yet as we continue to evolve our 'More than fast. More than signs.' consultative service offering, providing a wide variety of sign and graphic products to help customers visually communicate with all of their audiences."

The awards highlights from the convention include:

During the four-day International Convention, FASTSIGNS also presented more than 29 educational sessions and peer roundtables for franchisees and their teams. Festivities concluded with keynote speaker Jeffrey Hayzlett, Primetime TV & Radio Host and Best-Selling Author, who shared with attendees how to "Think Big, Act Bigger: The Rewards of Being Relentless" and hosted a special C-Suite Franchisee Panel, modeled after his prime time television show C-Suite TV.

About FASTSIGNS
FASTSIGNS International is the largest sign and visual communications franchisor in North America, and is the worldwide franchisor of more than 600 independently owned and operated FASTSIGNS centers in nine countries including the U.S., Canada, England, Brazil, Saudi Arabia, UAE, Grand Cayman, Mexico and Australia (where centers operate as SIGNWAVE).

FASTSIGNS consultants provide comprehensive visual marketing solutions and help companies of all sizes and across all industries attract more attention, communicate their message, sell more products, help visitors find their way and extend their branding across all of their customer touch points including décor, events, wearables and marketing materials.