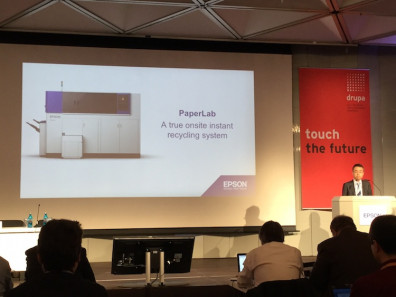 DÜSSELDORF, Germany — March 4, 2016 — Journalists attending this week's pre-drupa media event here, were jolted awake on Wednesday morning by Epson's announcement of a new office paper recycling machine: the PaperLab. Using no water, the system securely shreds waste paper, then turns it into new paper at a rate of 14 A4 sheets per minute, or 6,720 sheets in an eight-hour shift.

About 100 trade journalists from all over the world gathered for a preview of some of the innovations that will debut at drupa.

Journalists from graphic arts magazines around the world (including Printing Impressions' sister publication In-plant Graphics) watched a video animation showing the three separate processes PaperLab uses: fiberizing, binding and forming. It removes both toner and inkjet ink. Epson says it was designed for use in government offices, financial institutions and other enterprises that use large volumes of paper. The company believes the PaperLab represents a 2 billion Euro market opportunity.

Users can produce a variety of types of paper, from A4 and A3 office paper of various thicknesses to paper for business cards. The PaperLab will even produce colored and scented paper.

"Companies can reduce new paper purchases," pointed out COO Sunao Murata, who announced the device. They can also stop transporting paper off-site for recycling — and stop sending confidential document to external shredding companies, since the PaperLab takes care of shredding too, breaking documents down into nothing but fibers.

Epson plans to put the new "PaperLab" into commercial production in Japan in 2016. Though Epson showed a developmental prototype of the PaperLab at the Eco-Products 2015 environmental exhibition, for now the company is only planning to have a video demonstration at drupa.

E F T Bob Neubauer Author's page Bob has served as editor of In-plant Impressions since October of 1994. Prior to that he served for three years as managing editor of Printing Impressions, a commercial printing publication. Mr. Neubauer is very active in the U.S. in-plant industry. He attends all the major in-plant conferences and has visited nearly 170 in-plant operations around the world. He has given presentations to numerous in-plant groups in the U.S., Canada and Australia, including the Association of College and University Printers and the In-plant Printing and Mailing Association. He also coordinates the annual In-Print contest, cosponsored by IPMA and In-plant Impressions.
Related Content