RMGT, manufacturer of the leading 8-up sheetfed offset press in North America, announces that Envision3 is the most recent printing operation in North America to install the new 8-UP+ RMGT 970 offset press. Based in the greater Chicago area in Bloomingdale, IL, Envision3 is one of the top 300 largest printing and mailing manufacturers in the country and is a full-service offset and digital printing, packaging, mailing, and finishing company. Since its inception in 2000, Envision3 has been a traditional 40” shop having installed three Mitsubishi presses in this time period. Since Mitsubishi merged with Ryobi to form RMGT, Envision3 recently expanded their offset press line with the newly introduced RMGT 970 press. 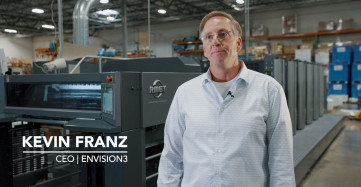 “We've been a Mitsubishi shop, now RMGT, for the 21 years since our formation,” states Kevin Franz, President, Envision3. “Mitsubishi and RM Machinery have won our business multiple times through the years with their new presses and great service.” Envision3 started in 2000 with a 40-inch and a 28-inch Mitsubishi offset press and later moved on to the Mitsubishi Diamond 3000 series. In the last quarter of 2021, Envision3 installed the latest addition to the 9 Series family, the RMGT 970, which features a new 25” x 38” sheet size.

“We traditionally have been a 40-inch shop,” comments Franz. “We had three 40-inch Mitsubishi, six-color presses with coating towers. Then we were shown the RMGT 970 press. With a sheet size of 38” x 25” we realized that the 970 fit our needs. Most of the work that needed to be done fits on that sheet size or smaller. Reducing the sheet size by just two inches creates a press with a much smaller footprint that saves money in the initial acquisition cost along with reducing operating costs of labor, paper, plates and energy. I can run the RMGT 970 with just one operator.”

“One of the features of the RMGT 970 is ability to print up the 24-point board stock,” states Lloyd Molloy, Director of Customer Service, RM Machinery. “Running at speeds of up to 16,000 sheets per hour, the RMGT 970, with a 25” x 38” sheet size is a true 8-up press that can be run with just one press operator,” observes Molloy. “Their press has fully-automatic plate changers, and LED-UV curing capabilities in the units and in the delivery. The new RMGT 970 press also can include ASAP, Automated Smart Assist Printing.”

RM Machinery is the authorized sales and service provider for RMGT in Canada along with all legacy Mitsubishi customers in the U.S.  “We are seeing a surge of interest among packaging printers and commercial printers who are upgrading their sheetfed offset press operations,” states Rahul Kaushik, CEO, RM Machinery. “It’s been eight years since the merger of Mitsubishi and Ryobi. Today RMGT has evolved into a market leader in the 8-up space with the RMGT 9 Series presses. We are thrilled to bring these solutions to the entire legacy Mitsubishi install base in the U.S.”