Ennis, Inc., has reported its financial results for the three and six months ended Aug. 31, 2019. Highlights include:

Keith Walters, chairman, CEO and president, commented by stating, “Overall we are pleased with our performance for the quarter. While our gross profit margin showed a slight decline from the sequential quarter, decreasing from 30.3% to 29.8%, our EBITDA margin was consistent in the low to mid 16% range.  Our gross profit margin percentage continues to be impacted by our past four acquisitions, which all had gross profit margins considerably lower than our historical gross profit margin.  While their margins are improving, until these acquisitions are fully integrated into our systems we would expect to continue to see a comparable negative impact on our consolidated gross profit margin percentage.  With that being said, these same acquisitions added $35.4 million in sales and $0.08 in diluted earnings per share for the six month period.  During the quarter, we completed the acquisition of The Flesh Company and its wholly-owned subsidiary, Impression Direct, Inc.  The Flesh Company is truly regarded as one of the outstanding companies in the print industry with a heritage that dates back over 100 years.  These companies provide business forms, checks, direct mail services, integrated products and labels.   This transaction will be accretive to earnings. We continue to strategically repurchase our shares and acquired over 22,000 shares during the quarter. We have repurchased almost 294,000 shares since the acquisition of Wright Business Graphics, which represents about 35.4% of the shares issued as consideration for that acquisition.  Given our strong financial position, we will continue to explore strategic opportunities as a way to profitably utilize our cash and leverage our balance sheet, and when advantageous, repurchase our shares in the marketplace.”

The following table reconciles EBITDA, a non-GAAP financial measure, for the three and six months ended August 31, 2019 and August 31, 2018 to the most comparable GAAP measure, net earnings (dollars in thousands). 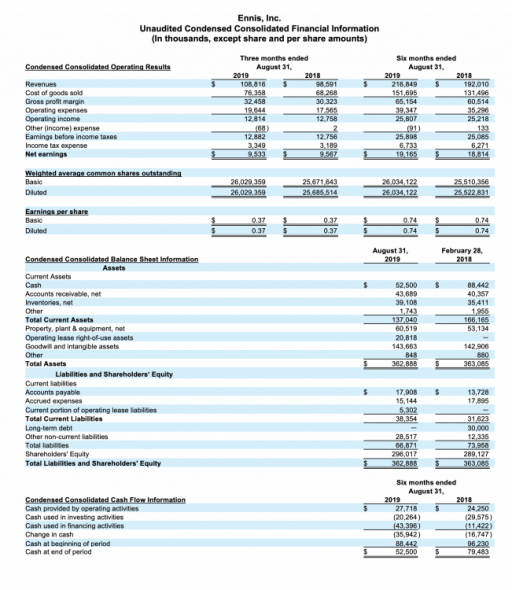