Echoes of a bygone era whisper through the buildings and streets of Chicago’s Printer’s Row. And it is there, on those historic streets, where you will find the last printer located there: Palmer Printing, still operating after 81 years in Chicago’s South Loop. The 35-employee commercial printing firm has seen companies come and go since it was founded in 1937, with many of them moving to suburban locations outside of the city.

Palmer Printing has been the last printer on Printer’s Row since 2007, when Rider Dickerson moved to a different location. But it too has recently made the decision to relocate - a move that President Ed Rossini and his father and former owner Ciro Rossini felt was the next logical step for the company.

In December 2017, Ciro Rossini, who owns the building where Palmer Printing is housed, decided to sell it to Chicago residential developer CMK. According to Ed Rossini, the company is in the process of looking for a new location with plans to move this year.

In the past 10 years, Ed Rossini says that the Printer’s Row area has evolved into a vibrant, energetic neighborhood with the addition of universities, restaurants, bars and shops.

While being at the center of a gentrified neighborhood has provided a great base for Palmer’s customers and employees, its location has posed some challenges, especially when trying to run a manufacturing operation on four floors located on a narrow street that has seen an upsurge in traffic due to the revival of the neighborhood.

Rossini notes that his first location of choice would be to stay in the city, but he is also exploring other areas. “I’m looking at locations both inside and outside of the city, and anything in between.”

Having worked on Printer’s Row for his entire life, Rossini says he definitely feels melancholy about the thought of moving. “It’s the only area that I’ve known since getting into the business with my dad,” Rossini says, who started working in the bindery during the summer, cleaning and making plates when he was just 12 years old which, he jokes, was a way to get him out of the house. After completing school, he started working there full-time. 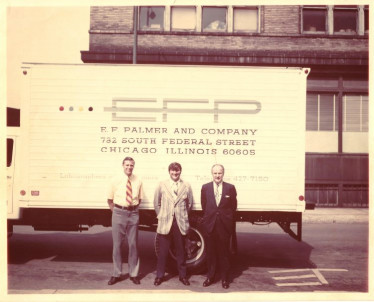 From the left are Don Chambers, Palmer Printing salesman; Ciro Rossini; and Founder of Palmer Printing, Everett Palmer, as they pose in front of a new truck on Federal street near Polk.

Ciro Rossini’s segway into the printing industry started when he was 18, working for his cousin’s husband, Everett Palmer, who opened the small print shop on Dearborn Street in Printer’s Row. From there, he moved the company across the alley to 732 S. Federal St. It was there that E.F. Palmer and Co. enjoyed most of its growth. Palmer purchased equipment as needed and by 1955 the printer had grown to 20 full-time employees. The company continued to grow and Palmer eventually retired and sold the business to Ciro Rossini. In 1982, E.F. Palmer and Co. moved to its present location at 739 S. Clark St. In addition to moving, the company decided to modify its image by changing its name to Palmer Printing.

In 1996, the elder Rossini decided to retire and pass the leadership of the company to Ed Rossini, but he does come back from time to time to visit clients. “When my father is in town, he’s very customer-focused. He jumps at a chance to visit a customer and loves interacting with people. He’s a relationship builder.”

Since taking over Palmer, Ed Rossini has kept the company moving forward through acquisition - the company acquired Diemand Printing in 2011 - and by keeping up with the latest equipment and technology. Palmer invested in a six-color, 40˝ Komori Lithrone sheetfed offset press; a two-color, 18˝ Heidelberg Printmaster QM 46-2; and a Sunraise 7000 thermography machine. On the digital printing side, the company operates a Xerox iGen 150 and three Xerox DocuTech 6135s. It also houses various binding, finishing and mailing equipment.

A growing part of Palmer’s business is direct mail. “It’s one of the few areas that’s growing in our business. Everything else has been steady, but that segment has definitely seen growth, and we have invested in that area to feed that growth.”

The company serves the financial services market, and more recently, has expanded into the higher education segment. “We have made some inroads with higher education. Our product mix works well in that space, due to our ability to handle data-intensive jobs and produce complicated campaigns.”

While Palmer Printing has not found a new facility yet, Ed Rossini says the company will likely operate out of two locations for a while in order to maintain stability and customer deadlines.

“We’re going through the steps right now to get that done, in an orderly fashion” he concludes. “While there will be some sadness of leaving, I’m excited for the next chapter to create a more efficient company, with additional manufacturing space, and a bigger parking lot and dock area. We are looking forward to building a new Palmer Printing somewhere else.”