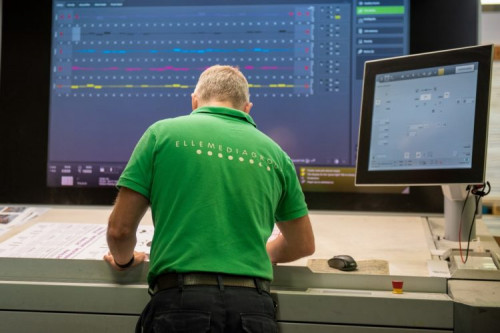 Heidelberger Druckmaschinen AG recently announced its new Speedmaster drupa 2020 generation. Market leading Elle Media Group have concluded the purchase of the very first serial 2020 drupa specification XL106-5+L in the world from Heidelberg UK. This will replace a three-year-old machine which has produced a 210 million impressions since its installation in March 2017.

Elle Media Group continues to be Heidelberg’s most productive operation in Europe on a straight configuration press. The business regularly produces over seven million impressions on one press, per month with an average run length of circa 4,000 and an average a makeready time of just over 3.2 minute. The new industry benchmark press will be delivered to the Essex-based company in March and will continue with the businesses ethos of deploying the latest technology to ensure the lowest operating cost per sheet and to ensure the right capacity is available for its ever growing greeting card publishing division and commercial print customers.

With this investment, the company continues to adapt its service structure to ensure technology enhances its customers experience at all times through its journey with Elle Media Group. With a full suite of Prinect products, its transition into a fully working Smart Print Shop and Push to Stop producer has been accelerated through the continued drive and delivery of its fantastic team. The numbers from Prinect Smart BI both in terms of output and quality showed this investment would deliver the required ROI in what remains one of the most competitive market spaces in worldwide print.

“We had been evaluating this investment for over 12 months as we knew with the output levels we were producing and the fixed operating costs in place that our investment cycle would need to be decreased to ensure we sustained our operating cost per sheet. This was the primary driver for the investment combined with the increase in capacity for the same overhead due to Intellistart 3 ensuring one minute improvement on current performance which will give us another 320 hrs. of available press time per year to ensure we maximize the opportunities being presented to us” says James Cuthbert, managing director at Elle Media Group.

Founded in 1982 as Falder Printing Limited, Elle Media Group is based in Seax WAY, Essex. The company boasts an in-house creative studio, the leading charity greeting card publishing house, and a print company equipped with the very best of modern technology. The acquisition of the new DRUPA specification XL106-5+L press is intended to ensure that Elle Media Group remains at the cutting-edge of technology in the industry in the years to come.