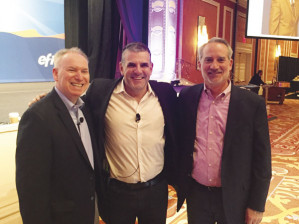 LAS VEGAS — EFI CEO Guy Gecht’s opening keynote address that kicked off the 17th EFI Connect worldwide users’ conference may have focused on the growing technological impact of artificial intelligence (AI), but a major highlight was the more than 200 educational sessions led by real-life industry experts on business management, sales, marketing and production technology for users of EFI products that occurred throughout the four-day event held here at the Wynn from Jan. 17-20.

Gecht’s opening keynote to the record crowd of approximately 1,500 EFI customers, supplier partners and media representatives hailing from 37 nations was quite thought-provoking, as he outlined technological revolutions that started with the development of the personal computer, followed by the internet, mobile smartphone technology and, more recently, the rapid acceleration of artificial intelligence.

Special sessions included fireside chat keynotes hosted by Gecht with Jeff Jacobson, who spoke on Connect’s opening day in one of his first public presentations since becoming CEO of Xerox, followed the next morning by a fireside chat with Quad/Graphics CEO Joel Quadracci. Quadracci told the story about how Quad/Graphics was originally built through “greenfield” growth, until he realized that to “be successful we had to be the consolidator in the marketplace.”

As a result, Quad/Graphics acquired World Color Press, Vertis and Brown Printing, which led, in part, to the subsequent closure of 36 printing plants in the past six years alone to better align industry capacity with market demand.

EFI CFO Marc Olin gave a “State of the Products” presentation, joined by Gaby Matsliach, SVP and GM of Productivity Software. Olin noted that EFI launched more products this year at Connect than at any previous conference.

He traced the increasing importance of the digital front end (DFE), from the basic hot folders of 2010 to today’s fully automated Fiery Command WorkStation. The same Fiery that’s driving your VUTEk printer, he said, can now be integrated to your Pace MIS application to provide common integration.

“Fiery has now become part of our fully certified MIS integration suite and is an integral piece of the total end-to-end production for both content and business workflows,” he says. “So if you’re not taking advantage of that yet, you’re really putting yourself at a competitive disadvantage.”

He went over recent Fiery technology innovations like the Fiery NX servers and NX station, and the new Fiery Navigator add-on that lets users monitor color management settings across all Fiery DFEs in their operation.

Olin discussed some future launches as well, like the Nozomi single-pass inkjet press for corrugated printing and AquaEndure inks, a new water-based UV-curable ink to enable a broader range of display graphics applications.

“The benefit of that is that you get the … curing associated with UV and LED, but with a water-based ink,” he said. 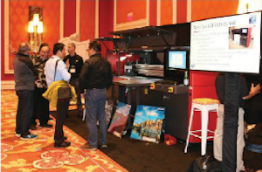 Another recurring theme at this year’s EFI Connect was the emphasis on multi-channel communications and how wide-format inkjet printing is an important part of the marketing mix. During his fireside chat with Guy Gecht, Joel Quadracci spoke about how direct mail, signage and point-of-purchase (POP) is “all part of a campaign. Integration of channels is the key. Knowing what channel drives what and the interconnectivity between them is essential,” he noted.

“Inkjet is a great driver for profits within EFI,” said Ken Hanulec, VP of Marketing, EFI Inkjet, during a special press briefing during Connect.

EFI continues to invest in inkjet technology — in all of its forms. A few examples:

During Gecht’s opening keynote, Mike Graff, CEO of Clifton, N.J.-based Sandy Alexander — a former Durst customer — provided a brief video interview about its recent installation of the brand-new VUTEk 5r. “The productivity and enhancements in the equipment are nothing short of amazing,” says Graff. “We are really excited about the equipment. In terms of the LED print quality, being able to produce anything on a Latex machine or a traditional machine is terrific. The output is nothing short of amazing in terms of quality. And also the XY cutter is a tremendous time saver.”

EFI’s largest soft signage printer, the 5.2-meter EFI VUTEk FabriVU 520, also launched at Connect. The printer gives users new capabilities for producing a broader range of soft signage products, including wall murals, theater drapes and other superwide seamless applications. The printer can produce up to 4,800 sq. ft./hr. (446 square meters), and prints at resolutions up to 2,400 dpi. It can do both direct-to-textile and transfer printing with an easy changeover using the same inkset for greater versatility. A patented ink-recovery system saves more than 95% of the ink lost in textile printing systems offered by other manufacturers.

“Image Options invested in EFI’s soft signage products with the FabriVU 340 and because of the demand we have seen, we quickly expanded our capabilities with the new FabriVU 540 printer,” says Tim Bennett, Image Options’ CEO. “This technology allows us to enter new markets with the widest and highest-speed performance available on the market today. The new 5.2-meter printer also gives us the ability to offer high-quality capabilities to clients who need un-seamed exhibit graphics.”