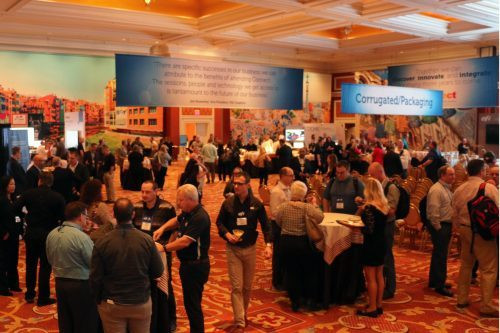 EFI Connect 2020 enabled plenty of opportunity for attendees to network.

EFI Connect — the annual users' conference of Electronics For Imaging customers — has served as a successful training, information sharing, and networking event for two decades. During that time, it has also served as a bellwether of printing industry trends by fostering thought-provoking and technology-based discussions.These have included, among others, the industry's analog-to-digital conversion; the need for greater automation; ever-growing product applications being enabled by inkjet printing; and even more futuristic topics, such as the potential benefits and threats of continued advancements in artificial intelligence.

The 21st rendition of EFI Connect, held Jan. 21-24, 2020, at the Wynn Las Vegas also marked a seminal point in the history of EFI itself. It served as both the first Connect event where industry veteran Jeff Jacobson would take center stage since becoming EFI CEO on August 13, 2019, as well as the first conference where EFI customers could learn more about the future direction of the formerly publicly-held company since it was acquired July 23, 2019, by technology-focused private equity firm Siris Capital Group for approximately $1.7 billion. 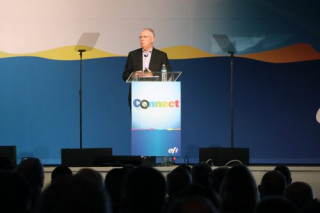 As such, its was quite appropriate that EFI Connect 2020 kicked off with an opening keynote from Jacobson, whose more than 30-year industry pedigree includes senior leadership roles at Kodak Polychrome Graphics, Eastman Kodak, Presstek and, most recently, Xerox. Titled "The 'Now' and 'Future' Pendulum," Jacobson detailed his approach to the industry based on Geoff Pilkington's four pillars of futuristic thinking: be present, continually test the status quo, become an expert generalist, and make life simple. He described to the approximately 800 conference attendees how these pillars really came into focus for him when, as CEO of Kodak Polychrome Graphics, he had to reinvent the lithographic plate manufacturer when it began to hemorrhage as the the industry shifted from film-based to computer-to-plate technology.

It was appropriate, too, that Jacobson would hold a fireside chat with longtime former EFI CEO Guy Gecht. As Jacobson noted in his keynote, EFI was the only CEO job he would have accepted to come back into the industry (after his departure from Xerox). And, during their discussion, it became apparent that the mutual admiration and long-term industry working relationship between Jacobson and Gecht also played a role in Jacobson's desire to further build upon Gecht's legacy at EFI. 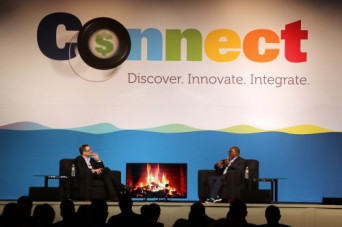 A perhaps even more telling fireside chat was held the following evening, when EFI COO Marc Olin interviewed Al Zollar, an executive partner at Siris Capital. Zollar, a software engineer who served in various roles as an IBM executive for 34 years, discussed how Siris typically seeks publicly-held technology companies, such as EFI, that are undervalued on Wall Street. He said Siris plans to continue to invest in EFI to help drive EFI's leading role in the analog-to-digital conversion that the printing industry continues to experience. 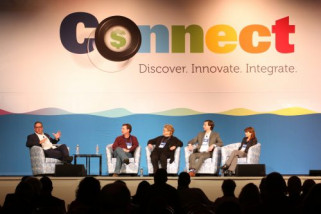 Another tradition at Connect is for EFI executives to provide conference attendees (including a separate program for press and analysts) with an update on new developments occurring within EFI's printing and packaging MIS/ERP software, EFI Fiery, and display graphics and industrial inkjet businesses. Presentations were provided by EFI executives Gaby Matsliach, Ken Hanulec, and Toby Weiss. Perhaps holding back on some announcements — given that it's a drupa year — they did reveal several new developments.

Among them, several new EFI Productivity Suite features were outlined, including:

In addition, new system maintenance tools and intuitive recovery mechanisms are incorporated to respond to high uptime requirements. Fiery Health Monitor aids users in keeping their DFE running in its most efficient condition at all times. 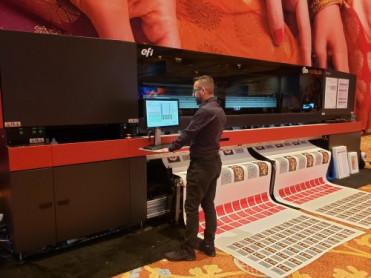 The VUTEk D line is equipped with additional printheads and offers both white and jettable clear ink for matte and glossy effects, covering a wider amount of applications such as wall decorations and murals, window graphics, flooring, high-value prints with selective gloss effects, fleet graphics, truck-side curtains, and more.

EFI Connect 2021 is scheduled for Jan. 19-22, again at the Wynn Las Vegas. It's a safe bet that many EFI customers will be marking it on their calendars for strong consideration next year.