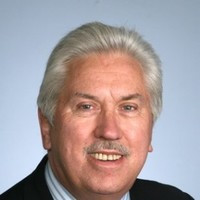 I'm sorry to report that Donald "Don" Piontek, 74, of Eden Prairie, Minn., passed away on Nov. 1, surrounded by his family. Author of a weekly blog for Printing Impressions called "The Finish Line," I got to know Don better the past several years on a professional, even, personal level. I admired his vast knowledge about commercial offset binding and finishing, as well as his ability to educate others about new digital finishing developments, trends, and best practices in a clear and concise manner.

And I was also touched by the pride he took in his son Stefan, who recently earned a Ph.d. in physical chemistry from Temple University in Philadelphia and got married, as well as Don's devotion toward his wife of 34 years, Janet, who I was able to meet in person at an Inkjet Summit. Sadly, Stefan celebrated his 30th birthday by having to announce his father's passing on Facebook.

A 1972 Fordham University graduate, Don started his career as a technician for Pitney Bowes, before migrating to actual production management after a stint in the Naval Reserve. Over the years, he worked for Kodak as a senior sales rep for the Admark inkjet printing system, served as managing director for SITMA USA, and helped establish the U.S. operations of Buhrs-Zaandam in late 1993, then serving as president of Buhrs Americas from early 1994 to 1998.

As Don wrote on his LinkedIn profile, "My Kodak years gave me a background in early production inkjet; and SITMA and Buhrs allowed me to learn complex, high-volume bindery applications, and to produce innovative high-speed finishing solutions for R.R. Donnelley, Quad/Graphics, and many more world-class printers."

He served as CEO of Finishing Resources for 16 years, the North American distributor of digital print-on-demand, saddle-stitching systems from U.K.-based IBIS Bindery Systems (IBIS Smart-binder) and CEM. "I deal with digital print salespeople every day, and almost all know the ins and outs of printer technology, but are a bit in the dark when it comes to digital finishing," he wrote.

"In planning a successful digital print implementation, you've got to plan around the finished product. A printed web is NOT the final product.   Being involved in finishing for digital print is exciting."

Don's background on the commercial bindery side of the business also gave him greater knowledge of commercial finishing technology, much of which can be used in digital. "As inkjet printer technology continues to evolve, finishing must follow," Don wrote. "It's a great and challenging time to be in this business. Both high-speed continuous and cut-sheet digital printers frequently require creative finishing systems that may be built from several vendor modules, or require a component that is custom-built."

Sadly, Don Piontek will no longer get to witness the ongoing maturation of production inkjet technology throughout the industry, but he was a key contributor to help drive its advancement, and to the evolution of offset to digital finishing. A memorial service was held in his honor yesterday at Pax Christi in Eden Prairie.