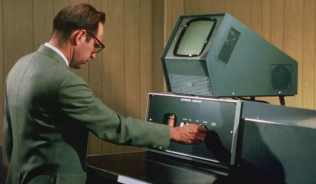 An operator using the Linotron 505 (courtesy of Linotype: The Film)

Derek Kyte, who is credited as one of the early inventors of modern electronic typesetting, passed away on Jan. 14, 2017, at the age of 90. Mr. Kyte was an inventor who covered the wide gamet of electronic imaging and color scanning. Many of his Linotype inventions received patents which includes the cathode-ray tube Linotron 505 for high-speed film typesetting along with his digital font algorithms.

"It is fair to say every product from Linotype-Paul or Linotype had Derek's input to it, including the phototypesetter range, Linotron, 505, 303,606,404 and of course the Linotron 202," said Patrick Venn (employed by Linotype-Paul/Linotype from 1973-1987) in an interview with GXpress.

According to GXpress, Mr. Kyte was way ahead of his time when in a patent he discusses electrostatic modulation and "light chopping" in a 1967 patent at a time when most typesetting was still being done in hot metal. The article further delves into the history of Mr. Kyte, who worked at the U.K.-based company Linotype where he helped to develop Linotron phototypesetters.

"Much of the success of Linotype-Paul and Linotype was due to the inventions of Derek — truly one of the great inventors and contributors to the graphic arts and publishing industries, " Venn adds. "Hundreds of people, companies, newspapers and magazines owe their success to Derek and his invention. Truly a genius!"

To read the full article on GXpress, click here.

To learn more about the Linotron 505 and to see it in action, watch this film dedicated to the invention: https://vimeo.com/75532294

Print Buying: Questions from the Printerverse