Both revenue and adjusted diluted EPS were at the high end of the range in the prior outlook driven by strong operating results in all segments despite weaker than expected foreign exchange rates and an unfavorable effective tax rate. Diluted EPS on a GAAP basis also includes a $0.12 per share charge related to the previously announced early redemption of the Company’s $200 million 2019 Senior Notes in March 2015.

“We delivered another strong quarter with both revenue and adjusted EPS at the top end of our outlook,” said Lee Schram, CEO of Deluxe. “With this strong start to the year, we continue to expect to deliver our sixth consecutive year of profitable revenue growth and our seventh consecutive year of cash flow from operations growth. 2015 is a special year for Deluxe as it represents our company’s 100th anniversary. Over the last 100 years, we have established Deluxe as a trusted partner to financial institutions and small businesses, offering products and services to help them grow and thrive. Looking ahead, we will continue our hard work to transform Deluxe to be more of a growth services provider for our clients.” 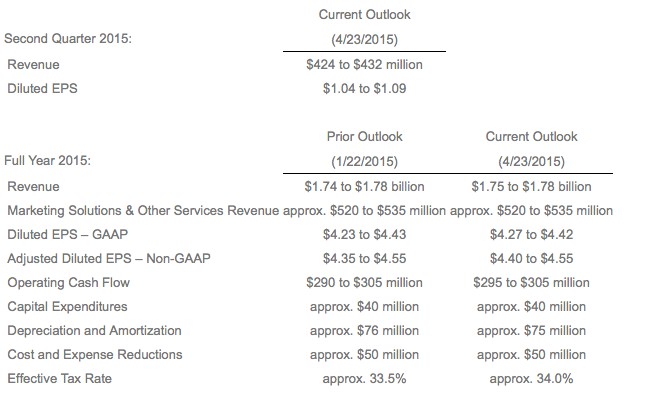