Deluxe Board of Directors Appoints Cheryl Mayberry McKissack as Chair 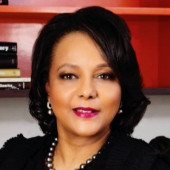 McKissack has nearly two decades of CEO experience at Nia Enterprises, a Chicago-based marketing, entrepreneurial business and digital consulting firm, which she founded in 2000. She is an experienced sales and marketing expert, and the author of “The Entrepreneurial Sell," her fourth published book. Her past experience includes roles as CEO of Ebony Media Operations LLC; COO and president of digital for Johnson Publishing Company; and as a technology executive, including Worldwide SVP and GM for Open Port Technology Inc., and VP of the Americas for U.S. Robotics Corporation. She also taught and motivated MBA students for more than a decade as an adjunct professor of entrepreneurship at her alma mater Northwestern University’s Kellogg School of Management. McKissack has served as a director at Deluxe since 2000.

“On behalf of the board, I am pleased to welcome Cheryl into the role as chair,” said Barry McCarthy, President and CEO of Deluxe. “We look forward to continuing to benefit from Cheryl’s knowledge and expertise as we begin the next chapter of our transformation to become a Trusted, Tech-Enabled Solutions Company. I would like to thank Martyn for his dedication and many contributions as chairman and look forward to his continued involvement with our board.”

“I am honored to take on the role of chair of the Deluxe board of directors as we continue to build on the company’s substantial progress in its transformation,” said Ms. Mayberry McKissack. “I look forward to working closely with Barry and the entire Deluxe management team to execute on our strategy to drive organic revenue growth.”

McKissack was the first African American woman, and (for the first decade of her tenure) the only female member of the PrivateBancorp board of directors. During her tenure at PrivateBancorp, she successfully launched the Governance program as Chair and was Vice Chair of the Compensation committee. In 2015, she was named one of the “Directors to Watch” by Directors & Boards. She has served as a board member and education sponsor for Chicago's LINK Unlimited organization, and on the boards of other nonprofits including Shedd Aquarium, and the Gaylord and Dorothy Donnelley Foundation. She currently serves on the boards of the University of Chicago Medical Center, the Chicago Library Foundation, and she is a member of the Economic Club of Chicago.