NIEUW-VENNEP, Netherlands — March 22, 2016 — Deltabach, the high-flying commercial print house based here, has reported a significant upturn in business following its adoption of the latest generation LED-UV curing system from Air Motion Systems. The AMS XP9/17W unit was retrofitted to its four-color Heidelberg CX 102-4-L press earlier last year but, as Deltabach Director Marc de Jong explains, it wasn’t until the final quarter that the potential of the new system to change his business became fully evident. 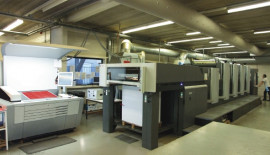 “Our primary reason for investing in the AMS LED-UV technology was to increase the efficiency and productivity of our B1 press," he shares. "It took us a while to get the balance of consumables right and adapt our practices and processes, but the numbers show that this first objective has been realized. In the year before the upgrade we printed 24 million sheets; that rose to 30 million, pro rata, during our transition period and now, if we maintain our current levels of output, we will hit 36 million sheets this year. This is without any changes in shift patterns, increases in manpower or electricity use and with added savings on things such as spray powder, which we no longer use.”

Three Key Benefits for Deltabach
The increase in productivity is largely the result of three key benefits of the AMS LED-UV curing technology.

First in 2011, following a three-year period during which its turnover had quadrupled to €6 million, Deltabach made the decision to replace its B2 press with the B1 Heidelberg CX 102. However, the additional costs incurred in changing formats at pre-press and bringing in a larger guillotine flow line meant their budget would not stretch to a long delivery for the press. The compromise proved to be problematic in practice: “It meant that we were only able to run at 12- or 13,000 sph (sheets per hour) when coating and this was obviously not satisfactory from a commercial standpoint,” says Marc de Jong. “With the AMS system we don’t need to coat, so we can run every job at up to 16,500 sph – that’s a 20% differential.”

Second, sheets printed with AMS LED-UV curing are dry in the delivery and so are ready for immediate printing on the reverse side and downstream processing:

“This doesn’t just mean we can promise better turnaround times to our customers,” explains Mr de Jong, “it has a major impact on our pressroom practice. Previously, on turn-and-tumble work, especially where uncoated or smooth papers were involved, the operator would output eight plates because the job would have to wait – maybe overnight, or even longer – before the piles could be turned and put back through the press. Of course, then another 10 minutes would be lost in getting the settings back to the correct levels… now we just turn and go ahead. If you try to quantify that – it’s amazing. It also gives another dimension to our planning because the timings have become predictable.”

And the third factor is one that is often cited, but perhaps without its full ramifications being appreciated:

“By eliminating spray powder we not only make life easier on the press and in the bindery, and improve the product for the customer, we are increasing the production time available on the press,” shares de Jong. “We used to take three hours at the end of each week to de-powder the press, and the same was true of a lot of the finishing machines, now that is no longer required it becomes more available production up-time. This all factors in to our bottom line. We also save up to an hour each day because the LED-UV inks overnight in the ducts, and even more time at the coating unit, where we used to have to change plates and clean up between different jobs.”

The impact of the changes on workflow is clearly visible in the Deltabach press hall where a large floor space is marked out into eight ‘lanes.’ This was formerly the marshaling yard where pallets of print were held and shuffled as they waited to dry before turning and reverse printing, or moving to post-press. It now acts as a buffer zone for print that is immediately ready for the next process, leaving plenty of free space for, possibly, the next press investment.

The AMS LED UV
With as much as 70% of its business being with agencies, brokers and other printers, production efficiency is essential for Deltabach to protect its margins while keeping its prices competitive. Now the added advantages of the AMS LED-UV technology are also helping win new business. As de Jong continues, “Many of the major brand owners and designers specify a requirement for coating as standard procedure. We have been able to show them that this is no longer necessary when using our system… we actually placed our product among those from their other suppliers and they couldn’t spot the difference. This was the green light for AMS LED-UV.”

In another instance, the benefits have been even more dramatic. A major national lottery company had been using a spread of print houses to supply its millions of tickets for mailing to potential entrants. The A4 sheets are printed on G-Print with the personalized ticket information on one side and the lottery company’s solid red corporate ID on the other. As a result, the waviness of the papers from the coating, and slippage from the spray powders were causing mayhem at the mailing house:

“When we switched to the AMS system we supplied our quota as usual, but without telling the client of the change in production,” explains de Jong. “It was not long before they called us in because their mailing house was demanding for all the tickets to be supplied like this. Their machines had never run so well. They could also see that the quality of the solid was better, too, and the fact that we are now able to supply at such short notice meant we won the entire contract.”

Now Deltabach is exploring other aspects of the advantages that the AMS LED-UV brings. For one of its property agency clients it is already printing ‘SOLD’ stickers which used to be sent for screen printing because they are on non-absorbent stocks, and tests are under way for innovative POS, packaging and promotional products on unusual substrates that have added-value to build better margins. Mr de Jong sees this as a separate enterprise, which will be aimed at direct customers within the region:

“We will look at any display, promotional or printed requirements the customer may have and we will supply. As far as our commercial printing service is concerned, Air Motion Systems’ LED-UV has made all the difference, like waving a magic wand over our business. The designers love the quality and the texture of our print, we compete on price and we are getting a reputation as the go-to supplier for quick turnaround work – even the same day – that’s pretty hard to beat.”

For Air Motion Systems, European Managing Director Carsten Barlebo reports, “Deltabach’s experience is a perfect example of how the AMS LED-UV solution can improve performance at the press and how this, in turn, can energize the entire production process. In addition to being entirely mercury-free, another important advantage of the AMS solution is our patented Dynamic Collimation system, which allows Total Flexible Lamp Positioning within the press and makes it the right choice for retro-fitting and re-commissioning as required. This means that any print company needing to improve its efficiency and increase capacity has an investment path that does not necessitate outlay on a new press.”

Fortune Favors the Brave
Deltabach was founded in 1970 by de Jong’s father as a spin-out of the stationery in plant he managed for a newspaper publisher in Leiden, between Amsterdam and The Hague. Although still specializing in commercial stationery print, it always championed new technology and was among the first adopters of CtP and MIS systems in the Netherlands. When expansion forced relocation to an eco-friendly business park in Nieuw-Vennep, closer to Amsterdam, in 2007, a sales partner was appointed to develop new jobbing commercial and trade work. The largely self-contained operation included studio, pre-press, multicolor B3 and B2 Heidelberg presses and in-house bindery. The mushrooming of turnover from €1.5 million in 2008 to €6 million in 2011 led to the unusual decision to replace the B2 press with a new B1 Heidelberg CX 102.

Marc de Jong comments, “We hadn’t intended to move out of the Leiden area, but there were no suitable options available there. As it turned out, the move into a new high-tech, eco-friendly building has been perfect for us; it’s a great environment to welcome our high-end corporate clients, agencies, designers and print brokers into … they never fail to be impressed. We were also fortunate that we chose not to specify a long delivery with IR drying when we made the move to B1. It was the constrictions imposed by that press configuration that led me to investigate alternative solutions as our business developed. I make a point of following the latest innovations by checking the trade media in the United States, Printweek.com and so on, and when I read about AMS LED-UV I was impressed by the claims for eliminating powder, increasing speeds and the sheets being ready for immediate back-up printing or finishing; I wasn’t thinking about the ability to print on awkward stocks or plastics. All the reports looked good so we made enquiries and Wifac, the agent for Air Motion Systems in the BeNeLux countries, arranged some site visits for us. When we saw it in operation we were convinced that AMS LED-UV was the right choice for us.”

Magic Lantern Show
As the first litho print house with the AMS LED UV system in the Netherlands, Deltabach is opening its doors to guest visitors in a series of special invitation demonstration days in April.