Dan Scobee Promoted to Director of Manufacturing at Allen Press 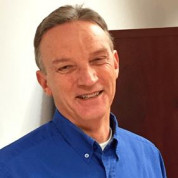 LAWRENCE, Kan. — May 10, 2017 — Allen Press is pleased to announce the promotion of Dan Scobee to director of manufacturing. Scobee first joined the Allen Press team in October 2016 as a web press consultant to help manage the installation of a new M600 web press.

“We couldn’t be happier that Dan will be taking on a larger role in the day-to-day leadership of the printing plant,” said Julie Rinke, Allen Press VP of operations. “His experience within the industry is invaluable to us but most importantly, to our customers.”

As director of manufacturing, Scobee is responsible for overseeing all aspects of the pressroom, bindery, logistics and warehouse.

Scobee got his start in the printing business in 1978 working for TPAK Inc.  He spent the majority of his career with Kansas City’s Henry Wurst, where he retired in 2016 after 36 years. After six months of retirement, Scobee decided to return to the printing industry. It was then that Scobee found Allen Press, as well as a familiar face in CEO Randy Radosevich.

“After talking to Randy, who I had worked with before, I decided to stay on and get more involved. I see that Allen Press is something special,” said Scobee.” I want to make this company the best place where people want to work.”

Outside of his role at Allen Press, Scobee enjoys living in Liberty, Mo., and golfing in the Kansas City area.