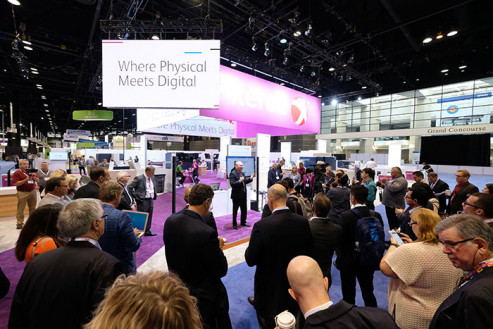 Xerox highlighted its digital innovations at its booth Monday.

Xerox’s tour of its booth (1302) on Monday morning highlighted the company’s latest innovations in digital printing, providing a unique twist to the traditional booth tour. At various stops along the route, Xerox customers, both live and via video, shared first hand insight into the technology and how it has impacted their businesses.

Prior to the tour, Xerox President Andrew Copley and CEO Jeff Jacobson each addressed the audience to express their excitement for Xerox’s future. Jacobson stated that Xerox’s Palo Alto Research Center (PARC) is 100% dedicated to serving the company and its customers.

“This is a company founded on innovation,” Jacobson said.

The first stop on the booth tour introduced Chris Bankes of The Institutes, one of the country’s largest producers of insurance textbooks. Bankes discussed The Institutes’ installation of two Xerox Brenva inkjet presses, singling out the Brenva’s missing-jet correction feature.

Thierry Ngoma of Vprint, Belgium’s largest direct mailer, was broadcast into the Xerox booth via a prerecorded video. With the Xerox Trivor with High Fusion Ink, Vprint can print personalized information in color on offset paper.

Michael Wurst, COO of Henry Wurst, Inc., shared his positive experiences with the Xerox Rialto inkjet press, as did Dave Tanner, GM of Boone Graphics, with the Versant 3100, and Alan Roberts, Senior VP of Operations, Data Communications Management, with the Xerox iGen5 with White Dry Ink and the XMPie software, used by the company for digital cut-sheet printing.