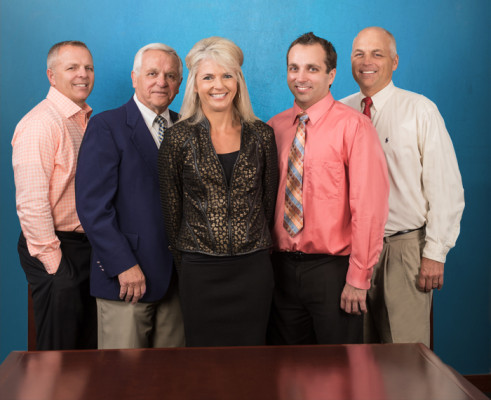 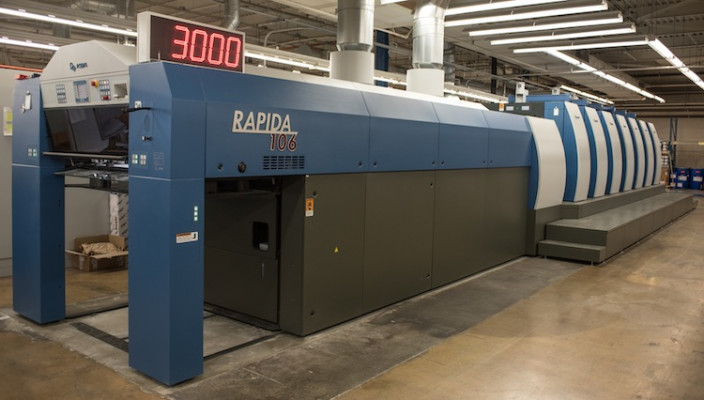 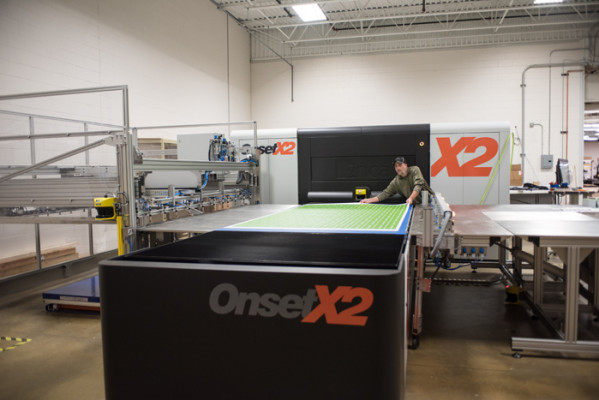 Crossmark was one of the first North American installations of a high-speed Inca Onset X2 UV flatbed printer from Fujifilm. 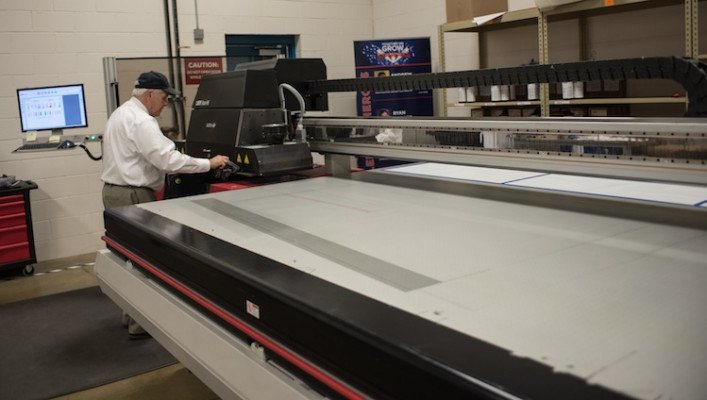 As it fast approaches its 30th anniversary, there are many blessings that commercial printer Crossmark Graphics needs to count. One is the astute vision of company founder James Dobrzynski Sr. (now semi-retired) and his influence on the second generation of family leadership at the New Berlin, Wis.-based firm.

The second is LED-UV drying technology, which ranks up there with sliced bread and the Magic Eraser among the so-called greatest things list. A third blessing is a new 41˝ offset press that graces the shop floor, while a fourth is wide-format digital output and its magnetic-like pull on the wallets of print buyers. That Crossmark Graphics is only beginning to scratch the surface of the company’s full potential falls in line with the mantra long espoused by Dobrzynski, notes his daughter, President and CEO Tammy Rechner.

“For years, my father loved to say, ‘If better is possible, good is not enough,’” Rechner points out. “We’re always looking for ways to increase both our efficiencies and our level of quality.”

The commercial printer has sought different avenues to spark continued growth, and quality and efficiency have both been keys to Crossmark Graphics reaching the $16 million plateau for its most recent fiscal year completed. The now 63-employee, woman-owned firm, which provides printing on plastics, packaging, point-of-purchase, lenticular and direct mail, in addition to a range of commercial work, primarily services the pharmaceutical, retail, automotive and technology spaces.

The Dobrzynski family, including Tammy and her three brothers, has a hand in every aspect of the operation. Jay Dobrzynski, serves as VP of operations, Mark Dobrzynski is VP of sales and Brian Dobrzynski is production manager.

“It works well for us, as a family-run business, because we are able to oversee all of the major aspects of the company,” Rechner notes. “My brothers take hands-on approaches throughout the entire process. And my dad is still involved as a consultant and helps out with the strategic planning. It’s great working with all of them.

“Everything I know about the business, I learned from my father,” she adds. “He is the true definition of an entrepreneur. He has taught us kids the value of hard work and instilled a strong work ethic while maintaining that family is the most important thing. He is truly devoted to and passionate about the printing industry.”

The company is a true American story, Rechner notes, as Jim Dobrzynski and a partner grew the company literally from the ground up starting in 1987. Her father handled the sales end while the partner did 100% of the production work. Before long, Crossmark Graphics added its first multicolor press and, in 1998, ventured into the 40˝-format sheetfed offset market.

Today, Crossmark Graphics relies on a trio of 40˝ presses, including a six-color KBA Rapida 106 sheetfed press with coater that was just installed this past spring. The press, which was selected from a field of three manufacturers, is the first KBA that Crossmark has owned. And the printer is bullish on the potential of achieving a 20% boost in production.

“We felt KBA had the best technology and listened to exactly what we needed in a press,” Rechner says. “We’re always looking for a partner-type relationship, not just a supplier one. KBA has gone beyond the call of duty in making sure we are 100% satisfied, and so far the press has been everything we thought it would be.”

The Rapida 106 is currently running 24/5, according to Rechner, to accommodate the high volume of work the plant is experiencing. It is configured with a host of automated features, such as fully automated plate changing and QualiTronic in-line color control. What has truly enhanced the overall workflow performance, however, is the LED-UV drying technology on the Rapida 106. The benefits are many: no heat, reduced energy consumption, no odor and, from the print customer’s point of view, no distortion of the sheet.

This wasn’t Crossmark Graphics’ first foray into LED-UV printing; the company was a very early adopter of LED-UV and enjoyed good results on a Komori Lithrone G40 press also equipped with an Air Motion Systems LED-UV system for several years.

As competitive advantages go, Rechner points out that her company was one of the first to install LED-UV in the United States. “There was no question in our minds that we would also add it to the new KBA Rapida 106,” she says.

With no heat generated from the drying lamp, Crossmark’s press crew is able to print on plastics and the other side of the sheet immediately without the distortion. The shop does a fair amount of lenticular work with a 150 line screen. Jobs can be moved from press to bindery in short order, resulting in quicker turn times.

One of the newer offerings at Crossmark Graphics that has sparked opportunities, particularly with retail market customers, is wide-format digital output. The company added its first device, an Agfa Jeti Titan HS UV flatbed printer with white ink printing capabilities, in late 2014. This past summer, the facility acquired an Inca Onset X2 wide-format UV flatbed printer from Fujifilm, making it one of the first North American installations for the unit.

According to Rechner, the company had been getting a lot of feedback from customers who were in need of wide-format output. The Titan and Onset enjoy a complementary relationship on the shop floor. In addition, Crossmark Graphics picked up an HP Indigo 7800 press to handle smaller format digital jobs.

Lenticular Capabilities on Three Devices
“We have the best of both worlds with the wide-format devices,” Rechner notes. “The Onset X2 is one of the fastest wide-format printers in the industry right now, and the Titan HS provides the highest quality [1,200 dpi] output. It also means we have the ability to print lenticular on three different types of machines.”

Being new to wide-format output hasn’t been much of a hindrance for Crossmark Graphics. Having an experienced operator at the helm has been a major plus, Rechner remarks.

“Wide-format has been a great fit for us,” she adds. “We produce a lot of indoor signage for retail customers. You can walk into various department stores throughout the United States and see a lot of our handiwork.”

With the HP Indigo 7800 in tow, the natural progression for Crossmark Graphics is to obtain a larger digital press for short-run work. Rechner estimates the company will probably be a buyer of the technology sometime in 2018. For now, the new equipment will certainly stimulate plenty of interest and new work.

Package printing looms as the best growth opportunity for Crossmark Graphics. Being a Good Manufacturing Practices certified provider — which is regulated by the U.S. Food & Drug Administration — has fostered some of the printer’s success. Rechner also believes that the firm is only beginning to scratch the surface with wide-format digital printing, and opportunities abound within its current customer base.

It is Crossmark Graphics’ nimble responsiveness that helps it differentiate from the competition. “We are an easy company to work with and have the ability to make decisions very quickly,” Rechner notes. “We try to go the extra mile for customers in helping them to achieve the best product possible. We set expectations high for ourselves in order to continue our relationships with our partners.”

A hard-working employee base that is naturally curious and eager to embrace new technology will go a long way toward sustaining Crossmark Graphics as it moves ahead. Rechner is excited to see where that future will take the company.

“Employee and customer satisfaction tell us a lot about how we’re doing,” she concludes. “We’ll continue to grow our customer base by leveraging all of this new technology. We’ll keep building strong partnerships, both on the customer and vendor side. We’re counting on our success to continue.”