DÜSSELDORF, Germany — June 21, 2016 — Following a successful drupa 2016 with strong CTP sales and massive interest in the diversification of its product portfolio, CRON has created a new focus within its business to develop products that optimize efficiency and profitably throughout conventional offset printing applications.

"drupa 2016 signaled a revitalization of print on many fronts," says Derek Sizer, CRON regional director EMEAR. “Technology was still at the show’s core, but it was the application of diverse technologies and what they can deliver that created the real interest in the halls." 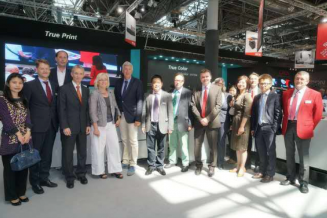 CRON welcomes the Parliament Group NRW-China to its stand at drupa.

On the CRON stand, the company’s EZcolor digital inking was a clear winner with customers, sales partners and the media alike. The EZcolor system breathes new life into sheetfed offset, not only reducing waste and enhancing quality but also bringing down the point at which short runs become profitable.

EZcolor, which can be retrofitted to any offset press, was just one of six new products shown by CRON at drupa, reflecting a conscious step out of CRON’s traditional CTP market and into the broader fields of offset press optimization, plate production and flexo packaging.

“Our strategy to expand our product portfolio was proven the right way to go at drupa,” confirms Sizer. “The industry showed a renewed appetite for improving existing print installations, rather than always chasing totally new solutions, which require significant capital investment. In addition to EZcolor, our new ‘greener’ plate technologies and Flexo CTP, as well as new automation for VLF were also very well received — so well in fact that the 5,000 Flexo CTP brochures we took to drupa weren’t enough! We are now keen to maintain the momentum of offering both incremental and dramatic improvements to traditional print workflows.

“Our future focus will examine each and every part of conventional print workflows to determine where enhancements, improvements and efficiencies can be made in order to make our customers more competitive. drupa has confirmed that there’s huge demand and scope for this activity worldwide. People always debate the real focus of drupa shows — packaging drupa, digital drupa, inkjet drupa — but I believe this show was aptly defined by one UK journalist who said that ‘print got its mojo back at drupa '16.' We are happy to be part of that process.”

In addition to the ‘usual’ drupa crowd, CRON also greeted a special group to its stand. Led by Chairman Dr. Gerhard Papke, the Parliament Group NRW-China — an organization that promotes cooperation between the North Rhine-Westphalia region of Germany and China — were also very welcome guests: “It was an honor to meet Dr. Papke and his group,” Sizer adds, “drupa is obviously a huge event with a lot of Chinese participation, so we were delighted that he made time to visit CRON. As a truly international company, we’re currently looking to expand our existing European headquarters in Düsseldorf — possibly even with a view to adding manufacturing in the long term — so we had some interesting discussions.”

About CRON
Since its founding in 1992, CRON has set its sights on redefining the direction of conventional offset print. Starting with imagesetting and moving to CTP, the company now provides a portfolio of integrated digital prepress technologies that improves the quality and efficiency of print workflows while reducing turnaround times and costs, as well as the point at which print runs become profitable. Today, CRON has four major strands to its business:

Together these products not only streamline the platemaking process but also provide measurement and control of the final printed products.