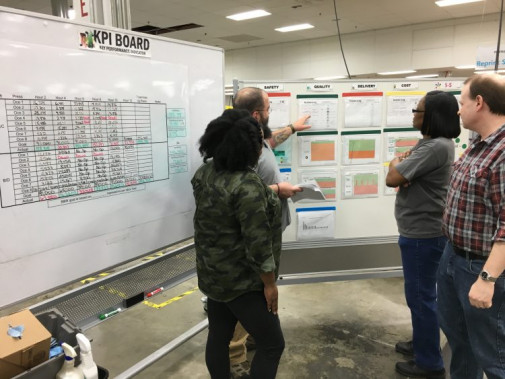 In the parable of the bricklayers, a traveler encounters three workers mortaring rows of bricks onto other bricks. “What are you doing?” inquires the traveler. The first worker answers, “What does it look like I’m doing? I’m laying bricks.” The second worker responds, “I’m putting up a wall.”

As the traveler pauses to gaze at the magnificent structure rising before them, the third worker replies, “I’m building a cathedral.”

Using continuous improvement (CI) to boost the operational efficiency of a printing plant is like that. Aimed at perfection, it’s a process as open-ended as the generation-spanning timeline of constructing a grand spired church. And while its scheme may be complex, its success depends upon winning the most basic kinds of belief and commitment from everyone taking part.

Every well-managed printing company strives to get better at what it does - business survival wouldn’t be possible otherwise. The companies that do it systematically, however, can link their best practices to measurable gains in productivity and profitability.

They also create cultures that the old cathedral builders would recognize right away: work environments where, according to Mike Maxon, VP of continuous improvement and engineering for Mimeo in Memphis, Tenn., “people feel part of something bigger than just running a press.”

Mimeo accomplishes this with the help of Lean manufacturing, as do the three other printing companies profiled for this story. Lean manufacturing combines monitored automation with just-in-time inventory management for increased production efficiency. “Lean” is one of a number of avenues to CI within an eclectic body of knowledge that lets printing companies choose the techniques they want to use instead of forcing them into one-size-fits-all routines.

The “continuous” aspect of CI is what makes it effective. This means that, as a management discipline, it doesn’t have to be overwhelming - it just needs to be uninterrupted. The CI process also must recognize that it owes everything to the wisdom of the people carrying it out.

“CI is about the journey of doing little improvements every day,” observes Shannon Kearney, the certified Lean Facilitator at Gill Studios in Lenexa, Kan. At Oklahoma City-based Vox Printing, Robert Reid, VP of operations, says, “we’re working on the barriers each day:”removing obstacles that “rob people of their right to pride of workmanship.”

The pride arises when everyone in the company is empowered, expected, and encouraged to identify and correct process errors that lead to waste and lost productivity. Once this fundamental principle of CI is applied, the company can begin to measure the resulting improvement in any way it finds relevant.

in Brooklyn Park, Minn., reveals that his company’s four key metrics are safety, quality of product, equipment productivity and on-time delivery. Safety is so integral to CI at GLS/NEXT that it has been added as a sixth S to the 5S checklist of workplace optimization procedures under the Kaizen CI methodology: Sort out, Straighten, Shine, Standardize and Sustain.

Although CI practitioners rely on concepts like Kaizen, 5S, Lean manufacturing and Six Sigma to help them design programs for greater operational efficiency, they don’t necessarily define the effort in these specialized terms.

At Mimeo, according to Brett Schweigert, operations manager, there’s no “moniker methodology” for CI, nor any room for “check the box” approaches that give the appearance of pursuing CI without actually achieving it. “Employee engagement” and “employee involvement” are better terms for the central aims of CI, he says.

Many of CI’s tenets and techniques come from Japan, where manufacturers like Toyota built the country’s post-World War II industrial recovery around eliminating waste and assuring product quality. Also fundamental to CI is the work of Dr. W. Edwards Deming, a revered figure in Japan and a teacher whose principles, Reid notes, have been followed at Vox Printing since the late 1980s.

Still another pathway to CI is certification under the ISO 9001 standard, whereby organizations create quality management systems aimed at consistently providing products and services that meet customer and regulatory requirements. Kathy Osterberg, quality manager at GLS/NEXT, says the company has held the certification since the early 2000s and is in compliance with the most recent version, ISO 9001:2015.

Drawing upon the collective wisdom of CI, printing companies find their own best ways of applying it to specific issues they want to address.

At Gill Studios, this can take the form of a Kaizen event: a focus-group exercise directed at uncovering problems and solving them. A Kaizen event, according to Kearney, may unfold over the course of a week with the participation of five to eight employees. At the end, corrective steps recommended by the group are taken, results are measured and the improvement is reported to management.

Value of ‘Gemba Walks’ and Talks

At Vox Printing, Reid keeps tabs on CI progress by taking “Gemba walks” - visiting locations in the plant where work is being performed and talking things over with the people actually doing the work. He also monitors the digital “barrier boards” where employees post notes detailing instances of equipment downtime lasting longer than five minutes.

Daily “barrier meetings” ensure that problems won’t have to be solved more than once. Reid adds that, since April 30 of this year, the company has been practicing a new CI methodology that requires everyone to make a measurable improvement every day.

Mimeo has its own adaptation of the “standing in a circle” or “chalk circle” method, a technique first developed by Taiichi Ohno, the mastermind of the Toyota Production System on which much of today’s CI practice is based. According Schweigert, this exercise consists of placing people in a circle for 30 minutes and directing them to make note of every occurrence of waste in the process they are observing. Their task is to then pick one waste case and “make it go away” by coming up with a remedy.

Kirk, a certified Lean Expert and a Six Sigma black belt, says the company also uses A3 reports - a CI assessment tool inspired by Deming - to analyze the root causes of problems and devise solutions for them.

Because the value of CI lies in learning from the results it yields, measuring outcomes is as essential to success as taking the right steps to achieve them.

Kearney says that Gill Studios quantifies every CI event it undertakes to demonstrate to management that the effort is having an impact. At Vox Printing, Reid uses production visibility technology from Flex Metrics to automate the tracking of incidents that lead to machine downtime. Mimeo, according to Maxon, has introduced a measurement system that helped it achieve a 60% reduction in lead times and a 25% reduction in labor during a pilot application. 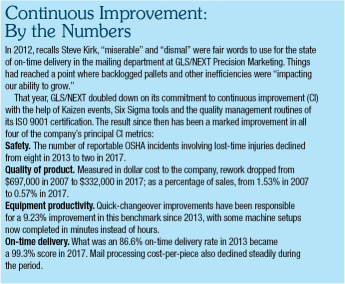 Osterberg, a certified Lean Practitioner currently pursuing a Six Sigma green belt, notes that GLS/NEXT measures its 5S benchmarks every day and issues calls to action whenever one of them falls below its goal line. The company has compiled a persuasive set of data illustrating how this kind of attention to detail has improved performance in each of its four key metrics (see the “Continuous Improvement: By the Numbers” sidebar).

Another basic idea of CI is that commitment to it must come from the top down and that everyone in the organization must have faith in it. This requires embracing change, but at none of the companies profiled here was earning acceptance for CI a struggle.

At family-owned Vox Printing, notes Reid, “upper management buy-in has been easy” after years of observing Deming’s management principles. “The concepts of creating an environment where people worked together to improve our processes seem to make sense.” He sees his role as that of an “encourager” whose job is to “celebrate” what people are doing right (see “The Why Behind the What” sidebar).

Kearney says CI implementation at Gill Studios began with training the company’s executive leadership to handle Kaizen events and take part in “audit lotteries” that assign them to evaluate specific departments. All senior managers, including the CEO, Kearney points out, are expected to undergo, as well as perform, the audits. “Everybody is 5S,” she says.

Mimeo is mastering Lean manufacturing through weekly lunch-and-learns and site steering committees at its three main production facilities, reports Maxon. Management understands that the process is continuous and that strict deadlines don’t apply. “Nobody is asking us, why isn’t it done yet, because it’s never done,” he says.

From ‘Chaotic’ to Confident

Osterberg notes that once GLS/NEXT’s middle managers stopped fearing that CI would turn their routines “chaotic,” buy-in was swift and the results began to speak for themselves. She credits support from executive management with the fact that “the acceleration of our continuous improvement has really sparked top down.” 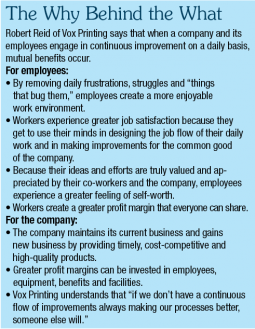 CI burnishes production metrics and boosts staff morale, but does it also increase competitive advantage? It certainly shows off well to visiting customers. Touring a CI-conscious Mimeo plant “blows clients out of the water” and prompts them to declare that the facility is better organized than other printing plants they’ve seen, according to Maxon. Kirk says “seven out of 10” ask if they can take photos of the CI setups they find at the GLS/NEXT plant.

GLS/NEXT’s CI implementation is always to the company’s advantage in external audits required by clients, Osterberg adds. And Reid says that when potential customers ask Vox Printing to document its quality assurance procedures, “we are able to show these companies that we not only have a quality manual that looks nice on paper, but we can also show them how we live it out through our continuous improvement processes.”

Nevertheless, the emphasis of CI remains mostly internal. Kearney believes its competitive advantage stems from the fact that it focuses on people in ways that ultimately benefit customer support. “I’m so glad we took that step 10 years ago,” she says. “It’s been a game changer.”

Vox Printing, the holder of multiple “Best Workplace” awards from Printing Industries of America, has tied its CI activities to a new profit-sharing program that replaces an annual bonus with quarterly payments from profits based on a 12-month rolling average. Under this plan, says Reid, employees can see and appreciate how their dedication to CI rewards everyone concerned.

“It takes a lot of trust,” he says, to foster an atmosphere where people won’t fear being “ridiculed or chastised” for their attempts to make things run more smoothly. True CI environments, on the other hand, are safe and supportive places where “even the mistakes can be enjoyed, laughed at and learned from.”