Requiring the aid of braces to walk and possessing more determination than education, Harvey E. Wagley founded United Graphics & Mailing Group in 1927 at age 17 with only $400. Ninety years later, his company remains as one of Chicago’s printing and direct mail services providers.

Harvey E. Wagley, who founded United Letter Service in 1927, now known as United Graphics & Mailing Group in Bensenville, Ill., was a true model of how determination, ingenuity and pride can overcome any difficulty that life throws our way. Told he would never be able to walk and talk again at the age of three because of infantile paralysis, Harvey Wagley overcame those odds through sheer determination and the help of his father.

Not ready to give up hope when his son was diagnosed, P.M. Wagley took him to a man who had a reputation of healing through prayer. The day they returned home, much to his father’s surprise, his son was able to move his hands and legs.

P.M. bought his son an Irish Mail children’s pedal car to exercise and strengthen his arms and legs. And, with the aid of metal leg braces, he was able to walk. And though he had difficulty in talking and being understood, Harvey entered school and progressed to the eighth grade. 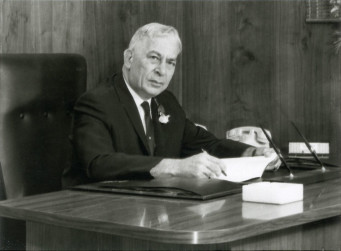 Harvey E. Wagley, the founder of United Letter Service, rised above many challenges to create a successful business.

As time moved on and with financial strain on his family, Harvey’s father found work while also attending medical school in Chicago. Despite his handicaps, the younger Wagley fell in with the wrong crowd in school. His father decided that he should move to Chicago to keep him out of trouble.

Harvey then took a job as a multigraph operator for the Henry Bosch & Co., a company that manufactured wallpaper. At that point, his left heel had drawn to be 5 ¼˝ higher than his right and he was having increasing difficulty in walking. He continued to wear leg braces until after bone surgery in 1962 and again in 1975.

After two years of working at Bosch during the day and nights at the Better Government Association, Wagley dedicated himself to improving his status in life. He greatly impressed his employer and had met many important businessmen, political figures and newspaper people at that time, who would later have an influence on his life and career.

Seventeen and in Business

His employer recommended that the then 17-year-old Wagley open up his own business. Hearing that a small letter shop was up for sale, he decided to purchase the business (without checking with his father) from its three partners for $400. However, the building manager refused to rent it to him because of his age. Harvey went to his father for assistance His father examined the company’s potential, gave his approval and then signed the lease. 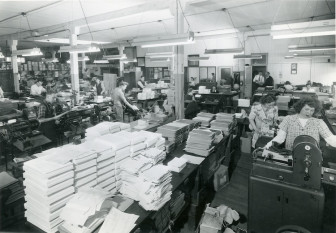 A view of the pressroom from the inside of the company in the early days when it was located on 710 South Clark St. in Chicago.

After a month in business, one customer stopped by with a job to print 1,000 envelopes in purple ink. To further get his business off the ground, Harvey Wagley made door-to-door visits to print buyers all over the Loop and North Side of Chicago with little success. But, as business began to pick up, he hired his first employee, Andy Ruff, who would stay with the company until his retirement in 1976.

As the years passed on, the company became successful, prompting Harvey to relocate it several times — including a move onto Chicago’s printer’s row (which the company moved out of just 12 years ago).

Harvey married Stella Jasczor in 1935 and had two children and, as the years followed, several grandchildren. In his 60s, he was diagnosed with lung cancer and had one lung removed, but that didn’t stop him from doing the things that he loved. In 1996, Harvey Wagley passed away at the age of 86 from heart failure.

When Harvey retired from the business in 1991, his son Harv Jr. and son-in-law John Hayner took it over. Now in its third generation, Scott Hayner, Harvey’s grandson, is a partner of the 18-employee commercial printing company. Hayner’s father, John Hayner, served as a VP and in customer service and sales throughout his 55+-year career at the company. 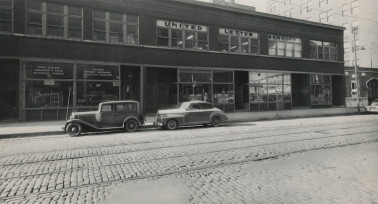 A view of the outside of the company in the early days when it was located on 710 South Clark St. in Chicago.

“I started here working summers at age 13 painting garbage cans and windows, running the presses and doing odd jobs,” says Hayner, who adds that he hired his sister’s husband, Erin Grogan, as president, to help him with the business end of running a company.

“Our company has accomplished so much over 90 years. I am trying to keep that tradition that my grandfather established,” he explains. “We do this by keeping customer service at the forefront and going that extra mile when a customer needs a project done.”

Hayner says that the investment in equipment that the company has made during the past few years has gone toward short-run digital printing work for associations and non-profit companies. The company operates three Konica Minolta bizhub digital presses, with the most recent being a bizhub PRESS C1085. 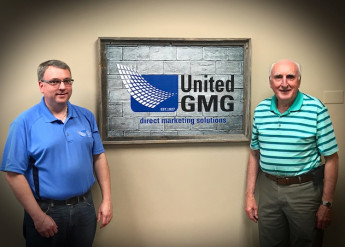 Scott Hayner, the owner of United Graphics & Mailing Group, stands with his father John Hayner, who was a VP and served in customer service and sales throughout his career at the company. He still enjoys working in the bindery cutting and folding, when he is in town.

Looking to the future, Hayner says United Graphics & Mailing Group plans to grow its sales and will continue to invest in salespeople. The company is also targeting the real estate segment, which requires higher-end printing.

“It’s important to tell the stories about the company’s history and pass them along so our employees know and appreciate who they’re working for. I’m proud to be part of my grandfather’s family. He is my hero. So, it is a real honor to carry on his tradition.”