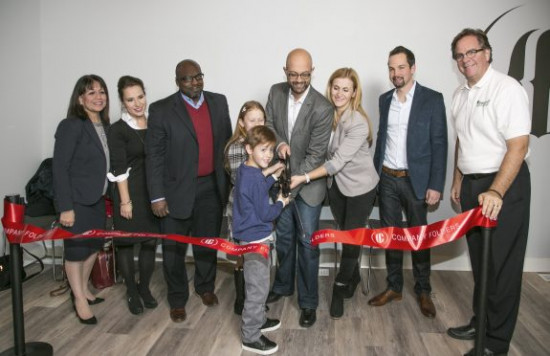 “The best thing we can do in Oakland County is create an environment where people find success and get the heck out of the way,” Gibb said. “And for this great company, we want to do just that.” 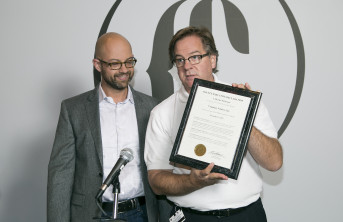 He said Company Folders fits perfectly in the county’s Emerging Sectors initiative, which focuses on the job creation and diversification of the county’s economy from businesses rooted in manufacturing to knowledge-based.

Gibb presented Vladimir Gendelman, founder and CEO, with a special proclamation. The proclamation salutes Gendelman and the business for its many achievements, including making the Inc. 5000’s list of fastest growing companies in America for 2015, 2016 and 2017.

Company Folders renovated its new building with a modern design (including an open floor plan, exposed ceilings and updated exterior) while still maintaining the integrity of the historic structure that was built about a century ago.

“I chose Pontiac to be our home because of the closeness of the community and the energy I felt,” said Vladimir Gendelman, founder and CEO.

He said the new building allows plenty of space for storage and will enable the company to grow five to six times in size. In the short term, however, the goal is to hire 16 people in content development, marketing and technology. In fact, the first of the new hires started Monday in customer support.

In addition, Company Folders is offering a 10% discount to its fellow Pontiac businesses when they use the promo code: ENERGIZEPONTIAC. 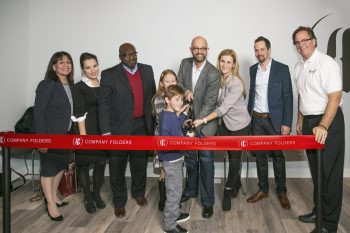 Representatives from the city of Pontiac, the Pontiac Regional Chamber and Main Street Pontiac also joined in the celebration.

“Company Folders coming to Pontiac really expands the city’s workforce development agenda by bringing new businesses to our city. It also brings new jobs to our local residents,” relayed Jane Bais-DiSessa, Pontiac’s Deputy Mayor. “Pontiac is truly moving forward by becoming a technology hub to the Metro Detroit Area, and Company Folders is one of those businesses we hope to continue to attract.”

She was impressed with Gendelman’s story of coming to America with his parents in 1990 with less than $500 to where he is today.

“Mr. Gendelman, you are a true example of the American dream,” Bais-DiSessa said.

Head, chairman of the Pontiac Regional Chamber board, referenced a sign on the south side of Pontiac on Woodward Avenue that reads: “Pontiac, where the world comes to play.” 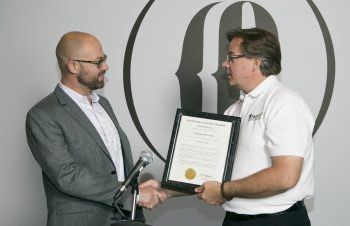 “I don’t think anybody thought it would be a Russian coming to Pontiac,” Head said with a laugh. “But he’s here now, and I think that sign started something that we didn’t believe would happen in the city where we are an international hub for business owners, entrepreneurs and people who want to play in our city.”

Company Folders is also the latest business to join both the Chamber and Main Street Pontiac.

“The importance of having businesses like Company Folders become involved with Main Street Pontiac is that they can provide insight into what their team and customers want to see in downtown, help drive the direction in which our community grows, network with other employees and residents in the area to build a support structure and form a close-knit community, and provide an outlet to become involved with the downtown,” noted Walters, president of Main Street Pontiac.