The demand for vehicle graphics is growing, but those who print them don't always get everything right. In a session at the SGIA Expo, Kim Magraw, national operations manager of Super Graphics, detailed some of the most common mistakes people make when printing fleet graphics and offered ideas on how to avoid them.

Problems can start during the sales process, he said, when businesses promise too much, such as offering too long of a warranty on graphics. Some materials, he said, are only warrantied for a year.

Another mistake is printing a graphic that is too long for the vehicle. Avoid this, he said, by getting exact measurements.

"I like to look at each vehicle individually," Magraw said.

He recommends that designers put an extra two to three inches of space at the edge of the graphics, to leave the installer room for adjustment.

It's also important to have a one inch overlap on each panel.

Magraw also talked about problems encountered with the install kits that are shipped to installers, such as when the edges of the graphics are wrinkled in transit due to poor packing. 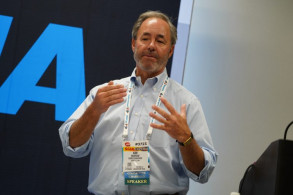 "Packing that kit is just as important as printing that kit," he said. If the longest panel is 8 feet, he said, use 10 feet of paper around it when rolling it onto a core. That way if it's unrolled on a dirty floor, the extra paper will protect it.

He told attendees to be sure panels are laid out in the right orientation so the installer doesn't install one of them upside down. Label each panel at the top on the back with information like "one of six." Indicate critical information for the installer, such as clearly stating that the logo must go an inch below the window, for example.

"Cleaning is the key," he insisted. "You clean well, your job's going to go well." He tells customers to wash the vehicle the day before, not the same day as the installation. Then he uses 70% isopropyl alcohol to clean every surface.

To remove the "memory" of the vinyl, he goes over the entire vehicle with a heat gun set at a minimum of 170 degrees. Doing this, he said, is the most important part of the job.